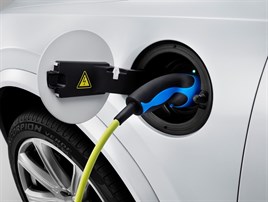 Volvo’s new XC90, which launches later this year, will feature a range of petrol, diesel and plug-in hybrid drivetrains with CO2 emissions starting at 60g/km.

The top of the range ‘Twin Engine’ will carry the badge ‘T8’ and be a plug-in electric car and high-performance car rolled into one.

Normal driving is conducted in the default hybrid mode. This utilises a two-litre, four-cylinder supercharged and turbocharged Drive-E petrol engine that powers the front wheels and an 80 hp (60 kW) electric motor that drives the rear wheels.

It uses the supercharger to fill in the bottom end of the power range to, while the turbocharger kicks in when the airflow builds up. The electric motor on the rear wheels provides immediate torque.

But at the push of a button the driver can switch to pure electric power where the range will be around 25 miles, and then, when needed, revert back to the combined capacity of the petrol engine and electric motor, with its combined output of around 400 hp and 640 Nm of torque.

Peter Mertens, senior vice president research and development of Volvo Car Group, said: “Since our new SPA technology is designed from the start to accommodate electrification technologies, the Twin Engine installation does not compromise luggage or passenger space.

“With our new Drive-E powertrains, we have created a family of intelligent petrol and diesel engines with power curves that give exciting driveability at the same time as delivering world-beating fuel economy.

“With seven people in the new XC90, carbon dioxide emissions per person and kilometre are outstandingly low."