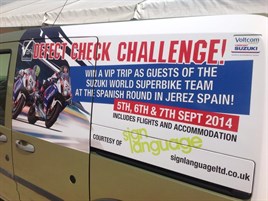 Occupational road risk manager Chris Charlton is heading off to Spain for an all-expenses paid trip to a round of the World Superbike Championship courtesy of vehicle graphics and wrapping specialist Sign Language.

He then had his competition entry selected from among all those that walked around the vehicle and correctly identified all the ‘defects’ and will jet off to Jerez on September 5 for the tenth round of this year’s Championship, which is currently led by Britain’s Tom Sykes.

Charlton said: “I was shocked and thrilled to win the competition. I have attended several trade events over the years and entered exhibitors’ competitions and never heard anything further so to be successful on this occasion was brilliant.”

Fast-expanding Sign Language has won a host of new vehicle livery contracts in 2014 with major organisations including Autoglass and Euro Car Parts, and also has a World Superbike Championship tie-up with Suzuki.

The company first started working with the manufacturer when it wrapped the Suzuki World Superbike team’s machines in 2012. It has since gone on to design new branding for Suzuki GB’s nationwide network of motorcycle dealers.

Sign Language managing director Tobin Jenkins said: “We were delighted to show off our livery design and application skills in respect of the Van Driver of the Year event and provide a competition prize. We hope that Chris has a fantastic trip and enjoys the racing.”