New Ford Focus delivers fuel-efficiency improvements of up to 15% 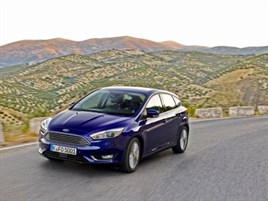 The new Ford Focus delivers the car's most fuel-efficient powertrain line-up ever with improvements of up to 15% and a significant CO2 emission reduction across the entire line-up.

It will be the first vehicle in Europe to offer Ford's new 1.5-litre EcoBoost petrol engine and new Focus will also be available for the first time with Ford's 1.5-litre TDCi diesel engine.

Ford engineers have further optimised power, torque and fuel efficiency from the 2.0-litre TDCi engine; and Focus will continue to be offered with the award-winning 1.0-litre EcoBoost petrol engine - including a 99g/km CO2 1.0-litre EcoBoost model.

Advanced new diesel engine technologies are available on both the 1.5-litre and 2.0-litre TDCi engines and include a lean NOX trap for cleaner exhaust emissions, while friction is reduced with microscopic applications of Diamond Like Coating (DLC); engine breathing enhanced with Variable Nozzle Turbocharger.

"When the new 1.5-litre TDCi engine is introduced, Focus will be available with all engines meeting Euro Stage VI months ahead of the legislation taking effect."

Ford's new 1.5-litre EcoBoost petrol engine achieves a 7% improvement in fuel efficiency when paired with the six-speed manual gearbox and equipped with Auto-Start-Stop, compared with the power-equivalent 1.6-litre EcoBoost engine it replaces. From early next year it also will be offered with a six-speed automatic transmission.

Available with 150PS or 182PS, the new 1.5-litre EcoBoost is equipped with the integrated exhaust manifold technology first introduced with Ford's 1.0-litre EcoBoost engine. This improves efficiency by helping the engine reach optimal temperatures faster, and also delivers torque more rapidly by minimising the distance exhaust gasses travel between the cylinders and turbocharger.

A water-cooled intake charge cooler delivers a more efficient feed of air into the engine and the control system has been reprogrammed to offer high levels of engine refinement, quietness and performance.

New Focus also will continue to be offered as a 1.0-litre EcoBoost version delivering 99g/km CO2, the previous version of which became the first non-hybrid petrol family car in Europe to offer sub-100g/km CO2 emissions earlier this year.

New gear ratios help to deliver the low emissions, alongside existing fuel-efficient technologies including Auto-Start-Stop, Active Grille Shutter, and Ford EcoMode that provides drivers with feedback on their driving style to help them become a more fuel-efficient driver.

In addition, Ford's Smart Regenerative Charging system selectively engages the alternator and charges the battery when the vehicle is coasting and braking to recapture energy that would otherwise be lost - reducing engine load for less fuel usage.

Paddle-shift controls will be available as an option with all automatic and PowerShift transmissions, both diesel and petrol - and enable drivers to control gear changes while keeping their hands on the steering wheel.

New Focus will also be offered for the first time with the Ford's 1.5-litre TDCi diesel engine. Available with 95PS or 120PS, it delivers greater power, torque and responsiveness, with optimised combustion chamber design, and cutting-edge turbocharger and fuel injection technology.

It will feature the most fuel-efficient combustion process from a Ford diesel engine to date and it has a lean NOX trap in the exhaust after-treatment system for even cleaner emissions.

"The total surface area of the active material inside the new lean NOX trap covers the equivalent of two and a half full-sized football pitches - despite measuring just 132mm in diameter and 124 mm in length," said David King, manager, diesel calibration, Ford of Europe.

"It acts like a sponge to capture the NOX emissions that result from more efficient combustion of diesel fuel, which is helping Ford achieve lower levels of CO2."

Ford has developed the engine's piston bowl to improve combustion, and coated a number of components including the pistons, pins and seals with a layer of DLC.

Less than a third the width of a human hair, the six-micron-thick layer of this extremely tough and smooth material bonded to a component is enough to reduce friction for improved efficiency and refinement.

The 95PS version will deliver 98g/km CO2 emissions, a 10% improvement compared to the 1.6-litre TDCi diesel. It also will deliver 74.3mpg fuel efficiency when mated to a six-speed manual gearbox.

A 120PS version of 1.5-litre TDCi diesel, with the six-speed manual gearbox, will also deliver a 10% fuel efficiency improvement and a PowerShift automatic option will be introduced next.

The 150PS version will deliver a 15% improvement in fuel efficiency over the previous 140PS model when specified with the six-speed manual gearbox, or PowerShift automatic transmission - achieved by introducing Auto-Start-Stop and Variable Nozzle Turbocharger technology. Torque is up from 340Nm to 350Nm.

"Customers needn't look to a specific variant to reduce their carbon footprint or running costs - they can now find optimised powertrains across the range."

Ford's 1.6-litre Ti-VCT petrol and 1.6-litre TDCi diesel engines will still be available on selected series in some markets.