Fleets braced for harsh winter ahead 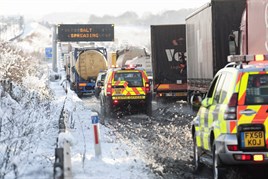 The Highways Agency is preparing for more extreme weather as the threat of high winds, flooding, snow and ice is predicted to rise.

However, while an army of gritters and snowploughs were working hard to keep roads open, it’s the increasing intensity of extreme weather events that poses a real challenge to the Highways Agency.

It must balance the vulnerability of the strategic road network, which handles 66% of all freight movement and 33% of all traffic in England, against the likelihood and severity of an extreme weather event.

“You can’t have every square metre of your network ploughed every 15 minutes,” he said. “The number of vehicles and the amount of staff you would have to have on standby would not be reasonable.”

It’s a view that is shared by government ministers and the transport select committee. “They say the amount of money we spend planning and preparing for winter weather has to be proportionate,” added Furlong.

The Highways Agency’s winter fleet, which consists of almost 600 vehicles and includes 23 ‘snow-blowers’, costs £45 million. The Agency’s overall budget for 2014/15 is £4.7 billion.

“Scientists tell us we’re in a phase where temperatures are gradually increasing, but equally they tell us extremes of weather – such as last winter being the wettest for 250 years in central and southern England – will become more frequent,” said Furlong.

The 4,300 miles of motorways and major A roads, which make-up the strategic road network, are particularly vulnerable to high winds, flooding, snow and ice.

Last winter, it faced some of the most extreme weather the UK has seen for many years. A succession of storms brought the highest winter rainfall across southern England since records began in 1766, resulting in widespread flooding, and extensive wind and coastal damage.

The impact on the country’s transport systems was considerable. Many road users experienced extensive and, in some cases, prolonged disruption.

Flooding closed many local roads, while felled trees or downed power lines temporarily blocked carriageways, but the extreme weather was not unique to last winter.

“Everything we do for winter in particular is based on the assumption that we could get the worst winter in ‘X’ number of years,” said Furlong

“However, sometimes the weather is so extreme that, no matter what your preparations are, it gets the better of you for a short time. Our priority when that occurs is to get things back to normal as quickly as possible.”

Furlong’s team are primarily involved in the planning and preparation for winter and severe weather. It provides guidance, manages more than 200,000 tonnes of salt reserves, delivers the Highways Agency’s weather information service and manages the winter fleet.

It has 240 weather monitoring stations strategically positioned around the network. These gather data on wind speed, rainfall and air temperature, while sensors buried in the road can report surface temperature, humidity, the dew point, whether the road is wet or dry and if it’s been salted.

The data is fed into a central web-based weather bureau known as HAWIS – the Highways Agency Weather Information Service.

“We want to make sure we use the salt effectively and efficiently,” said Furlong. “HAWIS gives us the ability to make intelligent decisions.”

Providing fleets with accurate and timely information is also a priority for the Highways Agency, which has been travelling around the country, meeting transport managers.

Furlong and his team have appeared at 11 regional Freight Transport Association (FTA) events during the past three months, meeting 1,200 fleet operators.

He said: “We need to get that feedback; we need to listen to customers and road users and hear about their experiences.”

Fleets have told the Highways Agency that the information it provides needs to be useful and credible. “We know there are improvements we can make,” continued Furlong. “We provide the best information we can, but sometimes it’s not as accurate as we would like for reasons outside our control.”

In an effort to improve the accuracy and delivery of data, the Highways Agency will re-launch the Traffic England website when it becomes Highways England – a Government-owned company – from April, 2015.

Furlong says the website will include a wealth of new information, have a new look and will be more intuitive. Further announcements are also expected on other aspects, such as how it intends to improve connectivity for users.

In the meantime, it’s already improving the way it provides information at motorway service stations from its service information points, with better route data. A new strategic patrol has also been introduced for traffic officers, whereby officers park up in areas that give them the widest geographical reach.

However, the Highways Agency is also urging company car and van drivers to do their bit and be prepared for any eventuality.

Furlong says an increasing proportion of drivers are not heeding weather warnings and, at the same time, are less familiar where they are on the network because of  satnav usage. He concluded: “It worries me that some people don’t know whether they’re going north, east, south or west. They don’t know what motorway they’re on or what junction they’re at.”