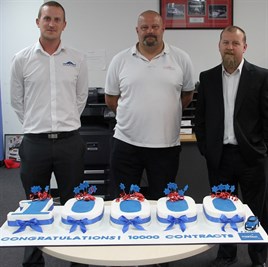 Summit Fleet Leasing and Management (Summit Fleet) has celebrated the 10,000th vehicle contract since its formation.

General manager David Clinch was presented with a special celebratory ‘birthday’ cake by system supplier Sofico at the head office in Rydalmere, Sydney.

Sofico supplies its Miles software to the company.

“Miles forms the backbone of our business,” said Clinch.

“Most other systems throughout our business are heavily integrated or at least rely heavily on the outputs created by Miles. It is definitely seen as our most critical technology solution,” he added.

Summit Fleet, which was established in 1997, currently manages more than 500 fleet clients in a wide range of industries, including corporate and community groups, health groups and local government bodies in Australia.

In 2005, the company went to market via a tender process to replace its existing fleet management system which had been in place since 1997. Following a comprehensive review process that included three other vendors, Sofico was selected as the most suitable ERP partner for Summit Fleet.

“During this selection and evaluation process, it became very clear that the other suppliers could not meet our specific requirements as comprehensively as Miles,” added Clinch.

Since then, Summit Fleet’s business volume has almost tripled, a growth rate in line with that of Sofico’s software systems which now manage more than 1 million vehicles worldwide.