Values stall but remain at near record levels, says BCA 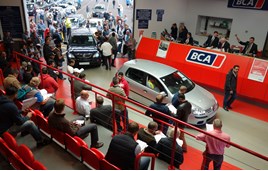 While values fell back in August as each sector recorded a small decline compared to July, it was another steady month for the wholesale used car market, according to BCA’s latest Pulse report.

Average values in the fleet and lease sector fell by just £14 and remained at near record levels, while dealer part-exchange values fell by £25 and nearly-new values also declined by just £14.

Both fleet/lease and dealer P/X values remained up year-on-year.

The headline average value of a used car fell by £73 over the month to £7,839, suggesting there was also a change in model mix compared to July.

“While the best quality stock – the condition one and two cars – will continue to attract a lot of buyer attention and achieve strong prices as they have done all year, it is the poorer presented vehicles that typically feel the price pressure.

“If the market conditions tighten then these vehicles will need to be competitively priced if they are to be sold.”

Fleet and lease cars averaged £9,648 in August, representing a negligible fall of just £14 (0.1%) compared to July and maintaining the strong price performance in the fleet and lease sector seen throughout most of 2015.

Retained value against original MRP (Manufacturers Retail Price) improved to 42.16% over the month, with age and mileage broadly static.

Average values were up by £55 (0.5%) compared to August 2014, with performance against CAP Clean up by half a point and retained value marginally down on 2014.

Average values for dealer part-exchange cars also fell slightly, down by £25 compared to July.  Year-on-year values remain ahead by £211 (5.2%), however, with CAP Clean performance ahead by 2.5 points compared to a year ago.

Nearly-new values also fell slightly compared to July, down by £14 to £21,236.   Model mix has a significant effect in this very low volume sector.  CAP Clean performance improved by nearly two points to 101.45%.