Fleet and business registrations down and diesel decline continues

UK new car registrations declined by 3.4% last month, with fleet and business registrations falling by 3.9%, as political and economic uncertainty and continuing confusion over diesel affected demand, according to figures from the Society of Motor Manufacturers and Traders (SMMT).

March is a crucial month for the new car market, as the plate change drives buyers into showrooms, with new car demand often seen as a bellwether for consumer confidence and the health of the wider economy, said the SMMT.

Declines were seen across almost every vehicle segment, including popular SUVs (1.7%) and small family cars (4%). However, superminis – Britain’s favourite vehicle type – saw a 4.4% increase in demand, taking a third (33.7%) of all registrations.

With almost 40 plug-in models on the market in the UK, and over 20 more expected to arrive in 2019, demand for these new technologies is expected to continue to grow.

Mike Hawes, SMMT chief executive, said: “March is a key barometer for the new car market, so this fall is of clear concern.

“While manufacturers continue to invest in exciting models and cutting-edge tech, for the UK to reap the full benefits of these advances, we need a strong market that encourages the adoption of new technology. That means supportive policies, not least on vehicle taxation and incentives, to give buyers the confidence to invest in the new car that best meets their driving needs.

“Above all, we urgently need an end to the political and economic uncertainty by removing permanently the threat of a ‘no deal’ Brexit and agreeing a future relationship that avoids any additional friction that would increase costs and hence prices.”

Technological innovation is not restricted to powertrains, however, with cutting-edge technology helping to improve driver comfort and safety.

AEB is now available on seven in ten cars, with over half of cars registered featuring the technology as standard. Meanwhile, overtaking sensors and adaptive cruise control were available to 51.9% of buyers.

Today’s figures come as SMMT launches a major new report showing UK consumers could be among the first in the world to benefit from self-driving vehicles.

The research positions the UK at number one, globally, for mass market potential. Provided the conditions are met, the rollout of connected and autonomous technology could prevent 47,000 serious accidents and save 3,900 lives over the next decade – with an overall £62 billion economic opportunity by 2030.

However, the ability to realise this is dependent in part on the UK leaving the EU with a deal that benefits the automotive industry.

A ‘no deal’ scenario would have a devastating impact on investment and our hard-won reputation – risking the UK’s position as a leading global market and a centre of excellence for innovation, says the SMMT.

“Our latest research found that 78% of people believe that vehicle emissions are a significant problem in the UK, highlighting the strong potential for AFV growth throughout 2019.

“With the imminent introduction of London’s Ultra Low Emission Zone and the arrival of more plug-in models set to increase adoption further, addressing shortcomings in charging infrastructure and supporting a transition to greener fleets must be government priorities.”

Ian Gilmartin, head of retail and wholesale at Barclays Corporate Banking, added: “Manufacturers have recognised the state of the market and cut supply accordingly, which has had the knock-on effect of removing some of the pressure on dealers to slash prices and margins to meet very high sales targets.

"We’re also observing longer lead times for new vehicles, which may mean some demand is deferred and will appear in future registration figures.

"These factors mitigate the dip but don’t disguise it entirely – there’s no escaping the fact that demand from consumers is unsurprisingly weak at the moment and business sales have fallen by almost half, with companies naturally reluctant to commit to car purchases in the face of ongoing economic uncertainty.

"Dealers shouldn’t be fixated on short-term bumps in sales figures – today’s numbers are to be expected in the context of everything else that’s happening in the UK at the moment.

"A longer-term view is required and the SMMT are right to highlight the need for policy support to help the industry introduce new technology.

"Westminster is focused on other things, but whatever Brexit outcome is achieved, it’s essential that promoting the next generation of vehicles remains a priority for the government and the car industry.”

Ashley Barnett, head of consultancy at Lex Autolease, concluded: “The new number plate release means March is usually a strong month for registrations, so although today’s fall is disappointing it’s not surprising with all of the current change in the market.

"Year-on-year, the market has also fallen slightly – and if we compare to this point in 2015, we are down by 4.5% on registrations four years ago with more people extending existing contracts. This suggests that confusion around future company car tax and WLTP is holding back people from ordering a replacement vehicle.

"The outcome of the consultation into WLTP and its impact on BIK and VED should provide some clarity when we see this in a couple of months.

“However the spotlight should be on alternatively-fuelled vehicles, and while we’re undoubtedly heading in the right direction with 40,837 registered so far this year – a year-on-year increase of 14.7% – we’re still some way behind where we need to be to reach 1m-plus for the Government’s 2030 Road to Zero minimum 50% target to be achievable – we need an additional 100,000 new alternatively-fueled registrations each year to enable us to reach this.

“In an environment where there are no grants available for plug-in hybrids and reduced grants for pure electric vehicles, the upfront cost of an alternatively-fuelled vehicle is for some an ongoing barrier to entry.

"We would welcome a wide-reaching announcement from Government designed to increase the appeal of low and zero emission driving, including benefits for the used car buyer.

"This could be a scheme like our own £1m cashback fund for pure electric vehicles, working with manufacturers to ensure that the falling cost of battery technology is reflected in list prices, or financial support to encourage growth in the second-hand market.

“In Norway, almost 60% of new cars sold in March were pure electric – this demonstrates that in an environment where there is no sales tax on the purchase price and continued tax incentives, it is possible to sustain continued take-up of electric vehicle technology.” 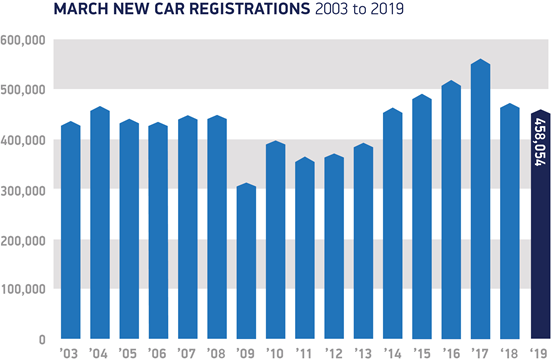 Skoda UK has announced a successful 2018 for its fleet division – maintaining a 3.5% market share and increasing true fleet registrations to 3.9%.

Fleet and business registrations down 5% in January

Fleet and business registrations in January were almost 5% (4.88%) lower than in the same month last year, according to the latest figures from the Society of Motor Manufacturers and Traders (SMMT).