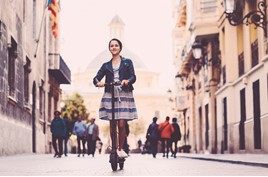 In February 2019, Madrid City Council took the plunge by authorising 18 shared electric scooter providers to operate in the city.

This amounted to 8,610 scooters being provided for public use and regulated by the council’s Sustainable Mobility Ordinance.

Ceilings have been set in each district of the Spanish capital so unreasonable concentrations of scooters are avoided.

Companies authorised to provide scooters must have insurance for users and third parties, offer geolocation and use apps designed so scooters cannot start or finish journeys in areas of the city where they are not permitted.

They must also start each day with scooters in the neighbourhoods and districts for which they have obtained a permit.

Electric scooters are prohibited from pavements, bus lanes, streets with more than one lane in each direction and from most of the orbital motorway. They can use cycle lanes and tracks of which Madrid has 342 kilometres, with another 13km due to be added in 2019.

Scooters must observe speed limits on public roads and while they may travel in public parks (anywhere bikes are allowed), they are confined to five kilometres per hour.

They must be parked in places designated for motorbikes and bikes and where these are not available may be parked on a pavement provided a three-metre gap is left.

Scooter drivers must be aged at least 15. Those aged below may use them in authorised places under parental supervision.

The city used its own powers to launch e-scooters onto its streets, but no UK council could do this since their use is unlawful.

Spain’s capital is classed, despite its size, simply as a municipality. But, given it easily exceeds 50,000 inhabitants, it enjoys control over urban passenger transport and environmental protection.

The Ministry of Local Government says Spain’s councils have financial autonomy and self-sufficiency.

This means they can make their own decisions on resources and how to spend them. They can raise money from combinations of income from assets, local taxes, public fares and income from fines among other sources.

Could this work in the UK?

Could such an operation be matched in the UK? Richard Dilks, chief executive of CoMoUK, a charity that promotes sustainable shared transport, says: “It is unlawful to use mobility scooters in the UK except on private land as they are not recognised by law and fall between two stools rather a long way apart for a definition – they are not powered bikes, which are legal, or mopeds.

“To be used they would have to be legally defined as something in micro-mobility but that is difficult as no one knows what might come next. Designers could put electric motors in all kinds of things and so we do not know what micro-mobility might look like in future.

Dilks suggests e-scooters could have a role for first- and last-mile journeys if they were legal, but that depends on the DfT.

“It is not straightforward, but taking a head-in-sand approach is not the way forward here – e-scooters can play a helpful role in our future mobility and people like to use them,” he says.

“We are, though, one of only a handful of industrialised countries where they cannot be used. In western Europe they are legal pretty much everywhere else.”

There is clearly an issue of how e-scooters interact with pedestrians and Dilks thinks pavements would not be right for them.

On the other hand, limiting them to the ‘public highway’ brings a further host of questions since the quality and suitability of such highways for e-scooters can vary enormously.

Dilks says: “I’m not aware of anywhere that allows e-scooters only in cycle lanes and, even if they did, those only go so far because cycle lanes only cover relatively small percentages of all highways – even in countries that have lots of them – and you still have to start and finish most journeys on non-cycle-lane roads.

“There are issues with safety and insurance but those can, of course, be more easily overcome in operator fleet systems where people hire them as needed rather than own them for themselves.”

Mark Smulian is a freelance journalist specialising in local government, law, travel, transport, housing, construction and planning. He has featured in a wide range of publications including the Local Government Chronical, Civil Service World, Law Society Gazette and the Sunday Telegraph. He is also former editor of Housing Today and news editor at Inside Housing and Surveyor.