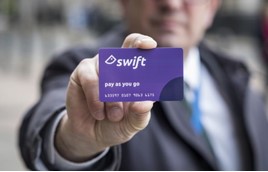 Transport for West Midlands (TfWM) has revealed that its public transport smartcard Swift was used for more than 50 million journeys by some 240,000 customers, in 2019.

The growth is up from 35.5 million journeys in 2017 and according to TfWM, is a result of better value ticket options, greater availability including online, and a growing range of additional uses

The card was developed and is operated by TfWM, part of the West Midlands Combined Authority (WMCA) working with bus, rail and tram operators.

Swift cards are available as season tickets for regular commuters and as p-as-you-go for occasional public transport users. They can also be bought and topped up in shops, ordered online and even purchased from self-service machines at bus stations.

While smart ticketing is usually associated with a plastic smart card, Swift was the first ticketing scheme in the UK to partner with Google to add Swift products directly into your mobile phone. This is currently available on West Midlands Metro.

Further recent innovations include using Swift to access gyms in Wolverhampton and for rail station parking in Bromsgrove and Sutton Coldfield. Work is under way to add more uses including cycle and car hire schemes.

Mayor of the West Midlands Andy Street said: “The Swift smart travel card offers great value and convenience for travellers and I am not surprised it has become one of the most successful in the country.

“On top of this we are also developing innovative ways to make it easier for people to pay for their journeys, such as mobile ticketing. Thanks to this approach and our £4 billion investment in bus, rail and Metro services, we are seeing real growth in numbers of people using public transport.”

Cllr Ian Ward, WMCA portfolio holder for transport and leader of Birmingham City Council, said: “Swift is great for travellers as not only does it offer discount on cash fares, but can be used by people regardless of their credit rating or whether or not they have a bank account or debit card removing a barrier to public transport.

"We are also launching a new way of using Swift where customers can use the card for whatever journeys they need to make safe in the knowledge that Swift will work out the best value fare over the day or week.”

This year, Swift will begin the rollout of a new type of public transport ticketing where customers will be able to travel on any bus, tram and ultimately train without having to have any knowledge of the fares or what product they need to buy.

Instead Swift will calculate daily or weekly what a customer needed to have paid to achieve best value.

Swift’s programme will also see it being used in a wider range of transport areas including for car parking, cycle and car hire.

This will support increasing numbers of people who are choosing to give up their private cars. Swift will be a central feature of extensions to the West Midland Metro network and the arrival of Sprint bus rapid transit.