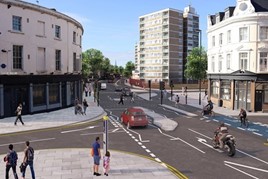 Transport for London (TfL) has started construction work on a 1.6km stretch of its new 10km segregated Cycleway route that it says will allow thousands of bike commuters to cycle across London when complete.

The route between Tower Bridge and Greenwich is due to be completed by the end of spring 2020 and work has also started on new cycleways between Acton and Wood Lane. Work on a route connecting Brentford and Olympia is also set to begin in December.

TfL has recently asked the public to have their say on proposals for other major new routes between Hackney and the Isle of Dogs, Ilford and Barking Riverside, and Lea Bridge and Dalston.

The segregated cycle route is an example of how cities like London are changing road layouts to promote other modes of transport and to help cut vehicle emissions.

TfL announced in August this year that it would expand its Santander Cycle hire scheme Tooley Street and Canada Water station, with new docking stations along the route to make it easier for people to start cycling.

Cllr Richard Livingstone, Cabinet Member for Environment, Transport and the Climate Emergency for Southwark Council, said: “The brand new section of Cycleway 4 will open up miles of segregated highway across Southwark.

“I hope that this will make cyclists feel safer, tackle congestion and help people to make choices that reduce air pollution in the area.”