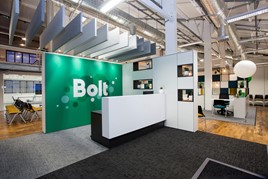 Ride hailing platform Bolt has opened a hub for drivers in Chiswick, west London, amid rapidly growing demand from drivers and passengers.

The company, which was formerly called Taxify, has seen passenger numbers in the capital surge to more than 1.5 million in six months, five times the three-month figure (300,000). More than 30,000 drivers have also been accepted on its platform since it relaunched in June.

Its figures are published as rival Uber, which has more 3.5 million passengers and 45,000 drivers in London, has less than 21 days to overturn Transport for London's decision not to grant it a licence following passenger safety concerns.

Bolt said its new hub will allow it to offer a "more personal service". It is staffed by a driver liaison team that can answer questions and provide information directly to current and prospective drivers. Chiswick was chosen after feedback that drivers wanted the hub to be located somewhere outside the London congestion zone, with good access to the M25, M4 and Heathrow, and easily accessible from a thoroughfare.