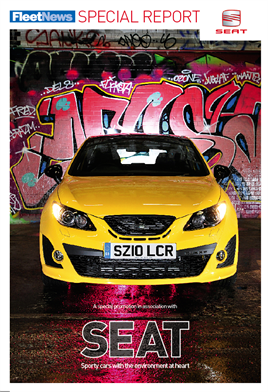 SEAT is focusing on cutting costs for fleets and minimising tax liability with a range of new low CO2 models introduced in 2010.

A combination of expanding the availability of fuel-saving features, new engines and all-new models will help drivers take advantage of class-leading low-CO2 emissions on many new SEATs.

The company also has other strategies aimed at cutting costs. A ‘longlife’ servicing regime is now being introduced across the SEAT range, where all engines will use high-grade, fully synthetic oil that can run the engines for longer between services.

There are no set service intervals in a longlife servicing regime. Depending on how the car is driven and on-road conditions, a service will be required anywhere between 9,000 and 18,000 miles/24 months (whichever comes sooner).

All these strategies tie in with SEAT’s philosophy of encouraging fleet operators to ‘expect more’ from car manufacturers. It has expanded its fleet team and has introduced a number of fleet-specialist dealers as well as a dedicated call centre for fleet customers.

Nick Andrews, head of fleet and remarketing at SEAT says: “We’re communicating to drivers and fleet operators that SEAT has already focused on reducing CO2 emissions with a huge amount of new technology across the entire range.

“We accept that Ecomotive perhaps wasn’t as well known as other low-CO2 branding from other manufacturers.”

He says as some of the technology used in the Ecomotive models has become more widely available across the SEAT range, a new E-Ecomotive badge will take over as highlighting the very lowest-CO2 and most fuel-efficient models in the range.

“Our Ibiza now has CO2 emissions from 92g/km, which is among the best in its class, and the 99g/km Leon Ecomotive has been available for a while.”

The Leon Ecomotive was chosen by British Gas earlier this year in a deal that will see 500 of them used by the utility firm.

A growing range of low-emission models

SEAT is confident that it has a growing range of models that fit in with self-imposed CO2-emissions caps whether companies set them at 160g/km, 120g/km or even 100g/km. 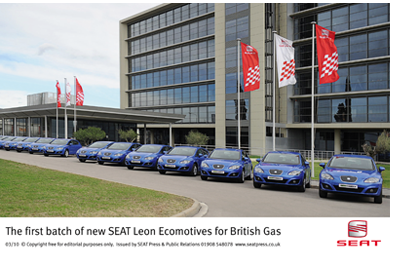 Even SEAT’s ultra high performance offering – the 155 mph Leon Cupra R – can rightly claim to have one eye on the environment. Its official CO2 figure of just 190g/km, allied to a combined economy figure of 34.9mpg, make it easily one of the least polluting cars in its class.

Andrews hopes to communicate some of the good news regarding emissions in its range of petrol engines over the coming months, particularly of the recently introduced 1.2-litre TSI engine.
The 105bhp engine replaces the previous normally-aspirated 1.6-litre, and offers more power and torque, as well as improved efficiency.

In the Altea and Altea XL, CO2 emissions are 132g/km (reduced from 173g/km and 178g/km respectively when using the 1.6-litre), with fuel consumption now greater than 50mpg on the combined cycle in both versions.

In the Leon, CO2 emissions are cut to 124g/km compared to 169g/km in the 1.6-litre discontinued earlier this year, while fuel consumption on the combined cycle is 54.3mpg. When manual versions of the Ibiza are equipped with the 1.2 TSI, it joins the ranks of the few non-hybrid petrol cars with CO2 emissions below 120g/km, with fuel consumption of more than 55mpg on the combined cycle.

The company’s pursuit of reduced emissions and improved economy doesn’t come at the expense of driving enjoyment, passenger comfort or style.

Andrews believes today’s SEAT line-up is not only the most environmentally responsible to date, it’s also comfortably the most stylish and well-equipped, too.

“We have a great range which we think environmentally conscious businesses will be interested in, not just because of the low CO2 emissions and fuel efficiency, but because they are also stylish cars.”