According to the all-knowing digital oracle Google, on the web there are 97,400 instances of someone writing the words ‘understated’ and ‘Audi’ within close proximity of each other.

And if you’re driving about in a new A5, with its muscled lines and diamanté LED running lights shining in everybody’s face, then slipping unnoticed under the radar just isn’t feasible.

It’s about as understated as an orange WAG during a mammoth Chardonnay and shopping trip on a Cheshire town high street.

It seems Audi is bored of the understated tag, too.

It’s in your face, showing off how glamorous, rich and sexy you are and Audi wants plenty of that very profitable business.

As a result, its cars are confident and forthright.

With the A5, there’s no doubt it has hit that showy mark.

It is a very good-looking car.

Thrusting and bold, it reeks of power –mechanically and emotionally. 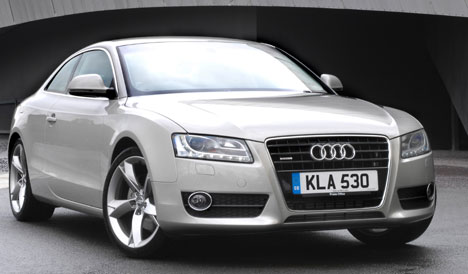 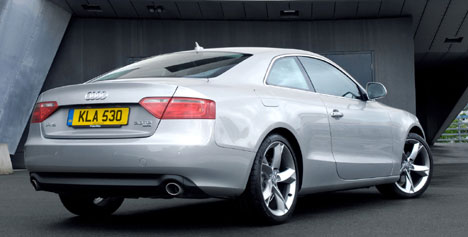 It doesn’t have the slinky lines of the BMW 3 Series Coupé, but be sure this is very much the car Audi had in mind when it was putting together the proposition for the A5.

The 3 Series Coupé has to be one of the most popular executive cars of modern times.

It is the very essence of corporate cool – stylish, urbane and successful.

To go up against it, Audi has kept to much of what has made it such a resurgent brand over the last decade.

The 3.0 TDI on test here is one of two models available at launch, the other being the 354bhp 4.2-litre S5, but the diesel variant is by no means outclassed.

It’s a shame that at present it is only offered with a manual gearbox, because it is crying out for that lovely smooth Tiptronic ‘box to make the most of its prodigious shove.

The manual gearbox is typically Audi. Perfectly accurate but too light, as is the clutch, and changes take some concentration to smooth out.

Also, the automatic parking brake takes some getting used to in the manual.

The interior is excellent and moves the game on a step, even by the high standards of Audis in this price range.

The classy slivers of aluminium, solid thick plastics and a little more curve in the MMI switches are all very classy, along with some superbly comfortable as standard leather seats.

This is a very nice place to be indeed.

As for the way it drives? It really shifts, but manages 40mpg without too much trouble.

Quattro splits drive 60/40 rear to front and you will never be short of traction or grip.

It still feels a little clinical against the more sensuous BMW but that’s only at the very edges of performance.

In everyday driving the A5 is a fast, comfortable and composed car. And with those LED headlights scowling at other cars, it was clear how quickly they seemed to veer out of your way.

It seems Audis are getting noticeable after all.