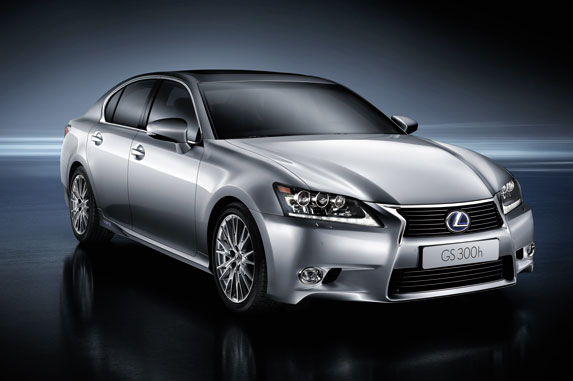 Lexus has essentially given up on diesel engines for Europe. Its only dalliance with diesel was in the previous generation of the IS model, but the 220d (and later the 200d) were available only with manual transmissions and failed to keep pace with German rivals on low CO2 emissions.

The GS has never been offered with a diesel option.

Before the GS 450h arrived in 2006, it was available with six-cylinder or eight-cylinder petrol power and remained very much a niche product in the diesel-dominated executive car sector.

In 2012 the latest GS range was launched as a hybrid-only GS 450h, and while Lexus remained convinced that petrol-electric was the right powertrain for the UK, it knew there was a significant share of the market – where the majority of Audi A6, BMW 5 Series and Mercedes-Benz E-Class models were sold – that it was missing out on.

It needed a power unit to rival four-cylinder diesel engines in its competitors and to match the best in the sector for CO2.

Lexus (and Toyota) maintains that petrol-electric hybrids are ‘greener’ than diesel engines cars because there are no particulates to worry about (although the requirements for Euro 6 diesel engines are extremely low), and emissions of oxides of nitrogen (NOx) are also significantly lower, despite diesel’s advantage over petrol in CO2 emissions.

Although the BMW 520d EfficentDynamics saloon had set the sector benchmark a few years ago with CO2 emissions of 119g/km, it wasn’t available as an automatic, and CO2 emissions of the 520d auto were a little higher.

When it came to alternative powertrains, Mercedes-Benz launched the E300 Bluetec Hybrid late in 2012, the only diesel hybrid in the sector, with CO2 emissions of 109g/km for the saloon.

Like petrol-electric hybrids, diesel-electrics are exempt from the 3% diesel supplement on BIK tax.

Lexus has succeeded in matching the impressive figure of the Mercedes-Benz E300 with the new GS 300h.

The SE variant also achieves 109g/km, although other versions have higher CO2 emissions.

The reason? The importance of hitting these benchmarks has resulted in extreme weight-saving measures, and the SE variant has not been given the extra structural strength at the rear to allow towing.

Lexus suggests that if you needed a vehicle for towing, you might choose something in a different sector of the market, and the small increase in CO2 offered by other models in its range is still an attractive proposition for fleets.

The SE has a high level of equipment as standard, but is priced several thousand pounds lower than hybrid or diesel rivals – models such as the E300 Bluetec Hybrid, Audi A6 3.0 TDI Multitronic and the BMW 525d auto. In doing so it offers significantly lower BIK tax bills (and let’s not forget employers’ National Insurance contributions for provision of company cars, also based on P11D value and BIK tax band).

Unlike the BMW, there isn’t much here for the driving enthusiast, although if you like a quiet, calm interior with a high-quality feel it won’t disappoint.

Acceleration is more than adequate from the 2.5-litre four-cylinder petrol engine combined with the electric motor, although the steering is inert and the ride a little unsettled.

But anyone who associates smugness with those who choose hybrids, rest assured that any satisfied expression on the face of anyone behind the wheel of the GS 300h will no doubt be derived from genuine and significant savings in company car tax and not any feeling of saving the planet.