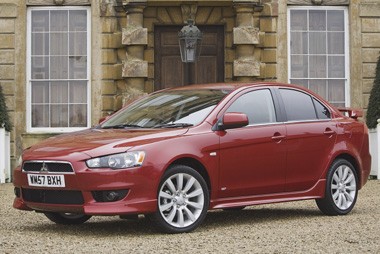 Anybody remember the Carisma? I do because I endured a week in one a few years ago and it was enough to turn you agoraphobic.

Just pull up the duvet and hide under it.

The poor old Carisma, and then the thing they called a Lancer for a while, summed up Mitsubishi’s issues in the core sectors of the market where most other manufacturers were doing good volumes.

Both were perfectly serviceable bits of kit, yet represented the inconsistency of thinking and product planning in the firm’s model line up that has ensured it was only a bit-part player in fleet, apart from its notable success in specialist and 4x4 markets.

But finally that gaping hole of mediocrity and anonymity in the lower-medium sector has been filled by another Lancer, and this time it’s a proper one.

Sensibly, it is little changed in appearance from the very sexy looking Evo X, so a company car driver will be carrying what Mitsubishi calls the ‘jet fighter’ grille and inverted shark nose of its more illustrious counterpart.

Make no mistake, this is a very handsome car, and here I shall dwell for a while because it’s actually rather important.

But what the Lancer offers is genuine kerbside appeal. It’s the best looking saloon on the market.

However, this particular model is a sheep in wolf’s clothing, because for the first time in a Lancer – and this is a reason why the last one disappeared without a trace – it comes with diesel running through its veins, thanks to what used to be Volkswagen’s 137bhp Pumpe Düse engine.

In the Lancer, it delivers its usual theatricals: lots of gruff noise and surging torque.

Refined it is not, but it’s a trusty and reliable bedfellow and, while it’s best not to do any Evo-style showboating at traffic lights for fear of embarrassment, it does manage a
0-62mph time of less than 10 seconds and it has a rather pointy, squirty quality that can be fun.

The interior is a marked improvement over previous Mitsubishis too.

The plastics in the cabin are still not up to Germanic standards, but neither do they feel like they were vacuum-formed in a fifth-form DT lesson.

Only the all-in-one sat nav, CD and radio system confounded me a little, but that seems a typical Japanese trait these days.

All in all, the Lancer has more charisma than the Carisma, and more point to it than the old Lancer. If the running costs are nailed it could make an appetising alternative to the standard fleet fare on offer.

It’s pretty slim pickings when it comes to lower-medium saloons to compete with the Lancer. For £16,499, the Lancer is a lot of car with a lot of attitude. Ranged against it are a very meagre-specced S40, Jetta and Octavia. S40 aside, all use Pumpe Düse diesel technology.

Its high emissions show what an old iteration of the Pumpe Düse engine Mitsubishi is running. Its low P11D price helps though – for £944 a year in benefit-in-kind tax for a basic rate taxpayer, the equipment list includes 18-inch alloy wheels and rear parking sensors.

The Skoda is the clear winner here and is nearly £200 cheaper over three years/60,000 miles than the next best, the Jetta. For the Lancer, the large tyres needed to fit the
18-inch alloys hit costs, while for the S40, it seems a semi-premium badge means more expensive labour rates and parts.

The Lancer’s high-ish fuel consumption of 44.1mpg on the combined cycle means that over 60,000 miles it consumes nearly £1,100 more diesel than the next worst, the Octavia. The 1.6-litre diesel in the S40 proves to be the most frugal at a claimed 57.6mpg.

The Lancer comes out best and it’s not hard to see why. It will sell in lower volumes, is well specced and looks great. Conversely, the S40 is the entry-level model, and this amount of depreciation on base spec doesn’t set the range up well. The Jetta fares surprisingly poorly.

The most expensive on nearly all fronts, the Lancer looks a costly option. The Octavia, with low fuel costs and service maintenance and repair rates, fulfils its role as the value option superbly. The S40’s low fuel bill keeps it in the hunt while the Jetta does little wrong.

This is a tough one because these cars perform different roles.

As an entry-level model, it isn’t very attractive in the first place and is not cheap enough to give it an edge.

The Octavia is very cheap to run and an excellent car, but would somebody looking at the Lancer countenance the ageing Skoda? They hit different buyers.

That leaves the Volkswagen, which is cheaper to run, has a great badge, but isn’t as sexy.

The Lancer is too expensive to run to recommend for most drivers, but if you have employees who are big petrolheads it would be a great choice with its rallying kudos.

But for the average Joe, it has to be the Jetta.