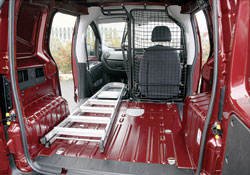 Small van versatility coupled with the imaginative use of available space as well as the introduction of lighter racking systems means that fleets are downsizing their light commercial vehicles and cutting costs by 10% to 15%.

Sales of sub-3.5 tonne vans are on the increase as operators move out of six and 7.5-tonne vehicles amid the realisation that smaller vehicles can deliver the same load-carrying capability while the business benefits from fuel economy savings.

Similarly, sales of smaller vans are on the rise at the expense of the ubiquitous large panel van.

Additionally, the advent of Euro5 emission-compliant engines means that manufacturers are producing smaller powerplants but with improved performance while also delivering lower emissions and better fuel consumption than the Euro4 units they are replacing.

A Citroën spokesman says: “The downsizing trend is being driven by the versatility of small vans, particularly mid-size and Hi-cube models.

"Features such as folding front passenger seats and folding bulkheads means vehicles can carry loads that previously they couldn’t.”

Dave Freeman, LCV specialist at leasing and fleet management company ING Car Lease, which has around 7,500 vans on its fleet, adds: “We challenge customers about the size of vans they use and the loads they carry.

"We often find fleets replace like-with-like because they have always operated the same size vehicle. However, innovations by manufacturers make downsizing possible and that delivers huge savings.”

He calculates that fleets can make savings of 10% to 15% in terms of monthly rentals and operating costs by being open to new ideas and ditching old habits.

The Citroën spokesman adds: “The imagination of manufacturers and van racking companies means that every available inch of internal space is being used.”

For example, computer-aided design and computer-aided technology has been adopted to maximise interior space to meet individual operator requirements.

Thus a combination of improved vehicle performance and flexibility means that van downsizing is a reality for many organisations with significant savings in operating costs accompanied by a ‘green’ halo.

It is claimed to deliver a 33% weight saving due to the use of lightweight components which means improved fuel consumption and allows a greater payload.

Latest engines offer the best of both worlds

Small engines mean lower emissions, which means savings on all motoring taxes – including Vehicle Excise Duty and company car tax which are directly linked to CO2 emissions – and a product of reduced emissions is improved fuel consumption.

Next year Ford will introduce a three-cylinder 1.0-litre petrol engine in its Focus that promises to deliver the performance of a 1.6 litre engine with CO2 emissions below 120g/km.

The engine, with power outputs of 100PS and 120PS, will also appear in the C-Max and B-Max. Ford’s downsized engines feature turbocharging, direct injection and other technologies.

Renault says its Energy engine range is an example of how innovation can work not only for performance, but also for low fuel consumption and CO2 emissions and reduced running costs.

A 1.2-litre engine will initially feature in Megane and Scenic next year. It will replace the existing 1.6 16v 110bhp powerplant and promises a 30% emissions reductions, a 25% MPG improvement as well as 5bhp more.