In the spotlight: Pendragon Contracts 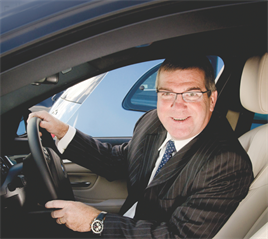 Neal Francis borrows a sound bite from former Prime Minister Gordon Brown when describing the Pendragon Contracts strategy: “We are running our business in a prudent way.”

Unlike the aforementioned Brown, who was renowned during his days as Chancellor for Budget statements containing multiple uses of the word ‘prudent’, but who ultimately reneged on that pledge, Francis is committed to his cautious approach to growth.

It has seen him pull back from previous growth predictions because the deals available at the time weren’t right for the business – particularly when the cost of funds priced Pendragon Contracts out of some potential contracts.

While growth from the current risk fleet of just under 13,000 to 25,000 or more remains an ultimate aspiration, “we won’t pray to the god of volume; it’s a false paradise,” says the divisional managing director.

“The figures are still relevant but we won’t prescribe timescales because of our discipline and structure and our key indicators for the business. What we will guarantee is a long-term sustainable business.”

Pendragon Contracts’s latest financial results show a slight reduction in operating profit from £6.9 million to
£5.4m and an operating margin down from 37% to 30%.

Francis attributes it to a reduction in the vehicles sold at the end of contract in 2013 compared to 2012, which reflects a lower level of new contracts written in 2009/10.

“We are happy that the business is moving efficiently and our external fleet size is growing, but while we keep an eye on our fleet size we are more concerned about our investment and returns,” he says. “We could have written more business last year but it would’ve been at breakeven or even loss-making so we declined.”

For a leasing business such as Pendragon, the cut-throat competitive deals have been a no-go area due to the cost of funding.

Available credit was an issue between 2009 and mid-2011 as the sector became squeezed during the recession; that problem then evolved into concerns over the cost of credit.

“When you have companies declaring 2% interest rates versus what independents can source at they have a major competitive advantage,” says Francis.

“That is now starting to dilute as more funders come to market and that competition is reducing the margin benefit of the bank-owned leasing companies. Also, the Government funding for lending scheme will start to disappear adding to the convergence of rental quotes.”

The inability to compete for certain business due to the impact of interest rates has resulted in a changing fleet mix for Pendragon. It has increasingly moved into essential user cars where the fleet priority is much more focused on cost of ownership modelling.

Consequently, contract terms have lengthened, now averaging 43 months and 78,000 miles. But, more importantly, those customers have opened the door to the van market. Eight years ago the van share of its risk fleet was less than 20%; now it’s around 26% and rising.

“It’s an area where we have been able to compete,” Francis says. It has encouraged him to extend an internal refurbishment initiative to external clients (see panel on RED – Reduced End-of-contract Damage costs, below).

Funding is only one part of the calculation that creates the leasing quote: also key is the residual value and, again, Pendragon tends to take a more prudent approach compared to some of its leasing compatriots.

“We are in the motor car futures market. I have sight of all cars we are selling through the group and it shows some big differences in values compared to what the guides are showing,” Francis says.

“This view allows us to form our own opinions based on our forecourt experiences.”
In contrast, some other leasing companies do not subject themselves to such restrictions when setting their residual values. Francis claims he is seeing quotes based on 115% of CAP Clean values and he has forthright views on what it means for fleets.

“Customers are getting deceived on resale values. We are experienced in this sector and we know where the values currently are and where they are likely to go,” he says.

“We have to run our business in the way that is good for our customers, our stakeholders and our shareholders.”

The day Fleet News meets Francis (April 1), he is celebrating a full decade in charge of Pendragon Contracts to the day. “It’s not an April Fool,” he quips.

Following 18 months of merry-go-round changes among the heads of the major leasing companies, it makes Francis one of the longer-serving bosses today.

The inevitable stability in business strategy that this affords Pendragon Contracts is mirrored by its ownership model: 32 years under dealer group Pendragon plc.

“We’ve been through recessions and falls in residual values, but over the cycle we’ve always been profitable and in cash. We buy, sell and service within the group and we have to make a sensible return – that’s a prerequisite,” Francis says.

Pendragon plc refinanced last year, reducing its 19 banking partners to four. It has boosted the group’s stability and, according to Francis, “put us on the front foot”.

Stability within the company has also extended to stability externally: Francis is interested only in fleet relationships that are for a minimum of three change cycles.

“Fleets that change partners quicker than that are on price only and they keep going around the process,” he explains.

This same philosophy underpins his strategy for new business wins: sole supply rather than multi-supply contracts.

“Dual and multi-supply is a pricing focus. With sole supply we plan a programme of items we can review with the customer without them feeling vulnerable,” Francis says.

“It’s about improving the provision of fleet – if you are in multi-supply, you don’t even have these conversations.”

He adds: “If you offer a high level of service and operate in a transparent way and if costs are falling, why would a fleet look elsewhere?”

Francis then dangles a tantalising carrot about future developments within the Pendragon business, suggesting changes which could shake-up the leasing sector a little.

“There are one or two things we will do this year that will turn heads in terms of where we are taking the business,” he says.

Such as? At this point, Francis becomes coy. “The announcements will be something about investment and also a step-change in how we wish to fulfil some of our ambitions. Some will be cosmetic, some will be fundamental.”

He’s more assured when talking about Pendragon’s propositions for the rest of the year. As the barriers on funding slip away, the opportunities for growth increase.

“We want to increase our penetration with existing customers from a partnership approach and being easy to work with. It is easy to use those words, but if you look at quarter one, an increased proportion of our business growth is from our existing customer base.”

The target stretches from SME to large corporates; Pendragon launched an affinity scheme 20 months ago but is equally happy pushing out business to its broker partners.

“We can offer contract hire, salary sacrifice, affinity; we can add it to our book or push out to the broker market,” Francis says. “Our agenda is organic growth and improving our service delivery to clients as well as looking at niche products.”