Was this article useful?
Click the thumbs up >
MARTIN Ward, CAP’s manufacturer relationships manager, scours the globe for the week’s insider fleet intelligence.

LOOKING through my notes from various meetings and events with manufacturers over the past few weeks and their projected sales for next year and beyond, it’s obviously the season of optimism.

Trying to sift which are realistic and which are just pie-in-the-sky is a tough job, because they can’t all be right or the market is set for an explosion in sales. If you were to add up all the expected sales, it could easily be in excess of three million next year. Fleet managers should be aware of these expectations, because if carmakers are struggling to hit targets, there could be some deals to be done late in 2007.

GLAD to see that the next-generation Renault Twingo will be available in right-hand drive, and come to the UK late 2007.

Looking at the photos of the concept design, which we are led to believe is very similar to the real thing, it looks good and will appeal to a wide audience. The Twingo has been a huge success abroad, and this success should be replicated here. Renault has always been a master at building small cars, and the Twingo looks to be no exception. 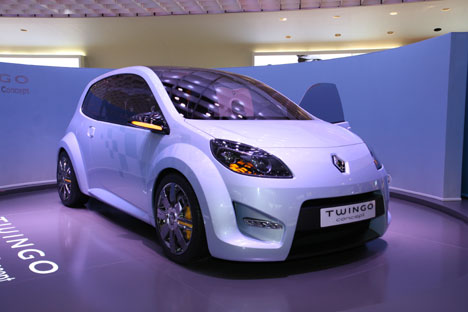 AN interesting invite to go and see the unveiling of some new mid-sized vans.

The novelty of this invite is that it is from not one manufacturer, but three. A joint launch is a first for me, but does make sense. The manufacturers are Fiat and PSA Peugeot Citroën, who are launching the new Ducato, Boxer and Relay simultaneously at the production facility in Sevel Nord, France, early in November.

All product managers and the chief executive officers from both PSA and Fiat will be there. They may be friendly on the day, but once sales start, let battle commence. The question is, how do you truly differentiate yours from the others?

A MEETING with managers from Jaguar, including product, used cars and fleet replacements. They explained current trading conditions, and future plans for Jaguar in the UK, which all seemed to make sense, in a tough market.

One interesting fact is the take- up of options on the new XK, which has a five-month waiting list.

More than 65% of customers are ordering larger wheels, and 55% are taking the upgraded leather option. The aluminium trim option is accounting for 50% of sales. How things, and buyers, are changing – historically this would always have been 100% wood. Is the ‘old conservative’ image finally being shed?

Hopefully next year’s new S-type will continue this revitalisation.

BEEN using a new Audi TT and the attention it receives is unbelievable. Everywhere you park, when you get back someone is staring at it. Who said legend’s shoes are impossible to fill? Audi is on a real winner with this car.

And here’s an illustration of just how seriously it takes the fleet market with the TT: more than a year ago then-Fleet Sales boss Adrian Short invited a few of us out to the factory in Germany to see and be driven in the TT, to ensure they had the specs absolutely spot on.

Jaguar has appointed Paul Stauvers as its used car sales and re-marketing manager to try and beef up residuals. Paul has been with Jag for 26 years, and his role is to have an, in his words, ‘holistic view’ of the used car market in the UK.