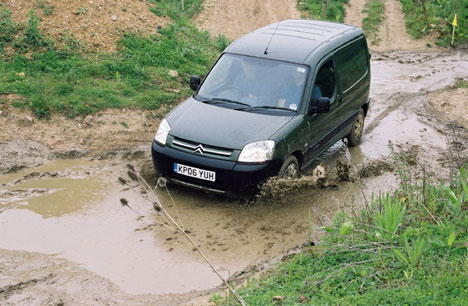 KHAKI is not exactly the colour you’d expect a test van to be clad in. In fact, I’ve never seen a khaki-tinted van in my life. But this army connotation suits the Citroën Berlingo XTR+ to a tee. It’s supposed to be rough and tough – and looks it.

At first glance this van seems like an ordinary Berlingo, but look a little closer and you’ll notice it is higher off the ground. Underneath there is a big scuff plate. So what exactly is going on under there?

The XTR+ fills a new niche. It isn’t a four- wheel drive vehicle but it has enough hi-tech gubbins under its wings to cope with most things that Britain’s terrain can throw at it.

But underneath, ground clearance has been raised by 40mm, there is an uprated heavy duty suspension system, a hefty underbody protection system, wheels are larger at 15in in diameter and tyres are Michelin Synchrone 4x4 185/65 R15s.

But what really makes the XTR+ special is its multi-plate limited slip differential. In slippery conditions, the system automatically apportions up to 75% of the engine’s torque between the two driving wheels. It means the wheel with the most grip gets the most power, without the driver having to do anything.

CITROËN is not pretending the XTR+ has the capabilities of a true off-roader and quite rightly points out that the fleets this vehicle is aimed at aren’t going to be scaling Mount Kilimanjaro, but instead want a van that can get through muddy lanes and ploughed fields.

But such is Citroën’s faith in the van that I was invited to a pukka off-road course to test it out. Now I don’t profess to be an expert off-roader so I was quite pleased to discover that I was to have a member of staff sitting with me, pointing out the best lines to take and advising me when to ease off on the throttle and which gears to choose.

The first thing to learn about the XTR+ is that it doesn’t handle like a 4x4, so it’s no good just pointing it at an obstacle and expecting it to just plough on through. It’s very much a case of easy-does-it. That diff won’t work if you keep revving up and hoping for the best.

As we tackled every more precarious twists, humps and turns, I began to have enormous respect for this plucky little performer.

FLEETS with a need to get into the rough won’t find a cheaper and more effective way of doing it. The XTR+ is a little star.