Was this article useful?
Click the thumbs up >
HAVING spent a week with the latest incarnation of the Citroen Dispatch, I’ve come to the conclusion that this vehicle is rather like Oscar Wilde’s character Dorian Gray – he’s the guy who never seems to get older, while his picture in the attic starts growing grey whiskers.

It might be a 10-year-old vehicle, but it certainly doesn’t behave like one – in fact it feels as fresh and versatile as it did when it first broke cover in 1996.

The Dispatch is based on the old Citroen Synergie MPV, so Citroen’s claims of car-like drivability are hard to fault. This vehicle also appears on our roads as the Fiat Scudo and the Peugeot Expert, by the way. 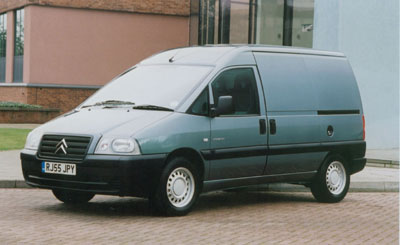 A recent nip and tuck saw bigger headlights added, along with a more robust front bumper, side and rear damage protection mouldings, extra noise reduction and redesigned seats. That little lot ensured the Dispatch didn’t start slipping behind the opposition.

Our test model is the higher-powered Enterprise model, which adds a CD player and ABS brakes as standard. Also standard across the range are twin sliding side doors and a driver’s airbag.

Paid-for options include electric front windows at £130, full bulkhead at £130 and air conditioning at £735.

THE Dispatch is a ‘halfway house’ kind of van that slots in between the likes of the Berlingo and real ‘man-size’ panel vans like the Relay. It offers a handy 4.0 cubic metres of space in the back, meaning it will easily gobble up four fridges or washing machines. But drivers can still winkle it into an average car parking space. Outside, it still looks stylish and modern too. 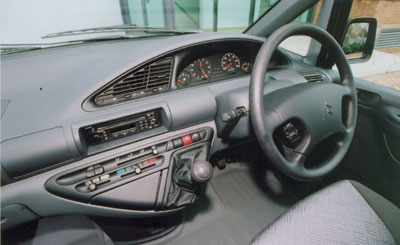 Entry to the cab is via remote central locking. The full bulkhead in our test model rather restricted space and made it feel cramped, but the plus side is that noise from the rear end is virtually non-existent.

The seats are firm and supportive but the intrusive lump that houses the dash-mounted gearstick means legroom for the middle passenger is severely limited.

Both the driver’s seat and steering wheel adjust for height so all drivers should find a comfortable position.

There is never going to be a lot of storage space in a cab of this size but Citroen has done the best with what’s available, adding a cup/can holder in each door and a handy storage shelf above the windscreen.

Other items of note cabwise are the lack of a rev counter – the space in the dash instead taken up by a massive clock – and the curious placing of the electric window buttons in the roof near the interior light. The rear load area is easily accessible with those twin side doors. The rear ones are metal, keeping cargo from prying eyes, and there are plenty of lashing points for tying in loads safely.

Under way, the 110bhp powerplant proves a right little flyer.

It’s a powerful unit for such a light vehicle and will show many bigger vehicles a clean pair of heels. It’s a stark contrast to the less powerful model which is, quite frankly, a bit of a slug. However, the dash-mounted gearstick must be the slickest in the business. You can almost change gear with one finger.

Add that to a nicely-weighted power steering and you have a very competent mover.

THE Dispatch may be long in the tooth but there’s many a good fleet tune to be played on this particular fiddle.