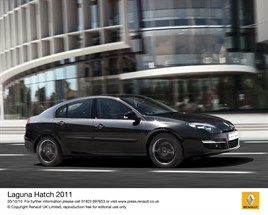 Renault has released UK pricing and specification for the Laguna 2011 Hatch and Sport Tourer models, with savings of up to £1,855 available compared to the previous range.

These services are free of charge for a three-month trial period, after which an annual subscription can be taken out via the TomTom HOME application. Pricing for this has yet to be confirmed in the UK, but is likely to be in the region of £60.

The Laguna 2011 range also benefits from a series of engine enhancements, resulting in reduced emissions and greater fuel economy across the range. The new line-up includes fully Euro 5-compliant engines, plus ten ‘eco2' branded versions with sub-140 grams CO2, covering each of the dCi 110 and 150 diesel-engined variants. Among the most prominent changes are the least emitting 1.5-litre dCi 110 which now emits even less than previously at 120 grams. The 2.0 dCi 180 has also gone down by 13 grams and the 2.0 16V 140 petrol by 7 grams. The dCi 110 is now able to achieve 60.1 mpg on the combined cycle, up from 57.6, while the dCi 180 has risen from 45.6 to 49.5.