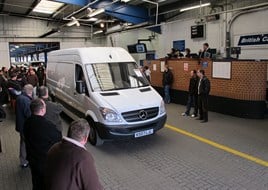 BCA’s latest Pulse data shows average LCV values fell slightly in December, largely due to the combination of reduced demand in the run-up to the Christmas period and the shorter trading period.

All three sectors experienced price pressure, although the drop in the part-exchange sector was negligible.

The December figure of £4,275 was down by just £28 on the November figure. However, sold volumes fell sharply compared to the previous month and performance against guide prices fell back by one and a half points to 98.5%.

Year-on-year, December 2011 was a substantial £208 ahead of the same month in 2010, equivalent to a 5.1% improvement. However this must be seen in the context of the heavy snowfall that severely restricted trading a year ago, says BCA.

“However, even taking this into account, prices remain strong when taking the longer view and average values over the last four months of 2011 comfortably outperformed the rest of the year.

“We also saw a lot of professional buyers stocking for the New Year and this helped keep values relatively firm – particularly for the best retail quality vehicles.”

Ward added: “January typically sees the market take off with a bang and that has certainly been the case in 2012.

“BCA Blackbushe has already established a new volume sold record in the first trading week of the New Year and we have experienced similar strong demand at all commercial sales around the BCA network.”