Government figures suggest £11.5 million has been claimed from the plug-in car grant scheme, helping to pay for 2,311 electric cars.

The figures, released in the past few days by the Department for Transport (DfT), come in the wake of a critical report from MPs on the Transport Committee, which questioned the effectiveness of Government support in trying to boost demand for electric vehicles (EVs).

Committee chairman Louise Ellman said: “The Government must do more to show that its plug-in vehicle strategy is a good use of public money.”

By 2015, the Government has predicted that there will be “tens of thousands” of plug-in vehicles in the UK.

However, only 2,400 EVs have been registered since January 2011 (not all have been bought using a grant) while total new car sales over the same period equated to 3.5 million vehicles.

Transport minister Norman Baker told the committee that he was “entirely relaxed about the number of cars that had been sold”, which was in line with expectations.

Claims for the plug-in car grant are increasing, with quarterly growth reported over the past year. The past three months saw 605 grants – the highest quarterly figure yet.

In part, this is due to the growing number of models being launched which qualify. More choice equals more sales. However, an unknown, but sizeable quantity of these sales have been registered by franchised dealers as demonstrators.

The quarterly growth comes despite the announcement in the March Budget that zero emission models and cars that emit less than 75g/km of CO2 will no longer be free from company car tax from April 2015 and will move into the 13% benefit-in-kind tax bracket. In 2016-2017 this will increase by a further 2%.

Although this is still the lowest tax band, the high price of EVs means employees will face substantial increases in their tax bills; a low emission diesel will be a much cheaper option.

Numbers for the plug-in van scheme continue to struggle. Grant claims are down by nearly 50% in the past three months compared to the previous quarter.

The Society of Motor Manufacturers and Traders (SMMT), responding to the Budget, told the Transport Committee that “unexpected announcements cause instability in the fleet market and provide mixed messages on market support”.

John Lewis, chief executive of the British Vehicle Rental and Leasing Association (BVRLA), added: “The Government needs to radically rethink its plug-in vehicle policy, which isn’t working. Nearly two years on we have a huge underspend and just a trickle of plug-in vehicle sales.

“Companies and drivers still have a lot of uncertainty about this new technology and these cars aren’t going to start selling in serious numbers until the Government undertakes a major review of its strategy and incentives.”

However, Baker defended the Government’s position, highlighting the steady increase in sales as a measure of success. 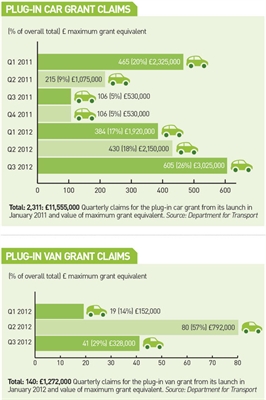