Mondeo delayed until 2014 as Ford restructures 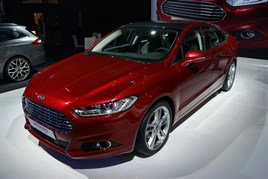 Ford has confirmed the next-generation Mondeo would be delayed until 2014 if planned closure its Genk plant goes ahead, while it announces two UK facilities will close next year.

The current Mondeo is built at Ford's Genk plant in Belgium, which the company wants to close in 2013 to stem heavy financial losses in Europe.

Ford has also confirmed the planned closure of two UK facilities next year – Ford’s assembly plant in Southampton, and stamping and tooling operations in Dagenham.

Along with a previously announced initiative to reduce approximately 500 salaried and agency positions across Europe, with the Ford salaried reductions achieved voluntarily - affect 6,200 positions or about 13% of Ford's European workforce.

The Mondeo, the European version of which was unveiled at the Paris Motor Show in September, is already on sale in North America as the Ford Fusion but built domestically.

The European version of the car, initially planned for introduction in late 2013 is now expected to be delayed another 12 months as European plants are repurposed to deal with the restructuring.

“Using the same One Ford plan that led to strong profitability in North America, we will address the crisis in Europe with a laser focus on new products, a stronger brand and increased cost efficiency,” said Alan Mulally, Ford president and CEO.

“We recognize the impact our actions will have on many employees and their families in Europe, and we will work together with all stakeholders during this necessary transformation of our business.”

Ford's goal is to achieve employee reductions in the UK through voluntary means, enhanced employee separation programs and redeployment to other Ford locations. Actions in Genk are dependent on the outcome of the ongoing employee consultation process.

Paul Everitt, SMMT chief executive commented: "This is difficult and disappointing news for all the people and families affected by today’s announcement, but it is part of wider restructuring to ensure a stronger and more competitive European automotive industry. The immediate priority is to help those impacted secure alternative employment. The decline in European vehicle markets and the uncertain future growth prospects has resulted in a number of vehicle manufacturers restructuring their operations. These are difficult times for the European automotive industry as manufacturers adapt to new market conditions and changing patterns of global demand.”