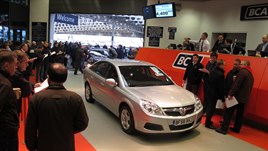 BCA communications director Tony Gannon commented “With on-going economic pressure, rising costs and a relatively weak retail environment, it might seem counter-intuitive to report that used car values continue to climb year-on-year.  However, supplies reaching the wholesale used car market are quite significantly down on the peak seen four to five years ago and there is a real shortage of good quality, ready to retail used cars.  This is leading to fierce competition and generally rising values for the best examples reaching the remarketing arena.

He added “This stock shortage is a long term issue and is unlikely to change until new car volumes pick up significantly and the economy improves enough to generate a bigger churn of vehicles in the marketplace.  This doesn’t diminish the effect of the typical seasonal pressures, of course, which have seen values and conversions weaken in early October.”

Looking in more detail, fleet & lease values (chart below) have increased steadily over recent quarters, reflecting the structural shortage of supply affecting the market.  The Quarter 3 2012 value of £8,177 was the highest on record (as was the value of £8,339 recorded for the month of September).  Year-on-year, Q3 12 was ahead by £917 (12.6%).

Based against the average values achieved in Q1 2005, the BCA Index tracks the quarterly market performance to give a clear view of where prices have been as well as indicating where they might go.   Unsurprisingly, given three months of consistently high values in Q3 the BCA Index reached 130, the highest point on record and up six points year on year and seven points on the previous quarter.