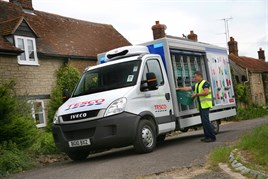 The home delivery division of the UK's biggest retailer was presented with the MORR Trophy at the Hilton Birmingham Metropole Hotel.

The MORR Trophy is presented as part of the RoSPA Occupational Health and Safety Awards, which are sponsored by NEBOSH (the National Examination Board in Occupational Safety and Health).

Colas was highly commended in the MORR category and DHL - Homebase Octavian Park - was commended.

Kevin Clinton, RoSPA's head of road safety, said: "The judges were extremely impressed with Tesco Dotcom's comprehensive and proactive approach to managing occupational road risk, which is firmly embedded throughout the company's organisation and operations.

“What is even more impressive is that they are not resting on their laurels. Having already created an excellent MORR system, they have worked hard to improve it even further, for example, by developing their own van driver training programme.

"It is this type of best practice that is so useful in encouraging all organisations with staff who drive for work to take action to reduce the risk for their staff when they are driving and for all other road users."

“This is a fantastic achievement and is testament to their continued commitment to managing occupational road risk, ensuring the safety of their employees and other road users."

As well as lifting the MORR Trophy each year from 2009-2012, Tesco Dotcom, which is based in Welwyn Garden City, also won the award in 2007.