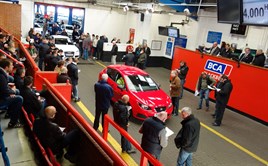 Analysis of vehicle prices by BCA shows the average value of a used car in 2012 was the highest annual figure on record.

BCA’s managing director Spencer Lock  said: "These latest BCA figures provide further proof that the stock shortage resulting from depressed new car sales since 2008 is having a significant effect on used car values three and four years down the line.

"Used car retailers will continue to be faced with increasing competition when sourcing the most attractive and retail-ready used cars, because these are the cars everyone wants and they are in such short supply."

As in previous years, the rise in values accelerated in the second half of 2012, with the average value of a used car at BCA reaching £6,415, up by £408 compared to the first six months. It is the highest average value for a half year period on record.

Fleet and lease car values in the second half of 2012 rose by 12.3% year-on-year, while dealer part-exchange car values rose by 12.6% over the same period.

Lock added: "While interest in the best retail quality cars can be exceptional, overall demand is best described as fragile. Dealers are less likely to speculate because they know retail buyers are pending very carefully and expecting great value for money."