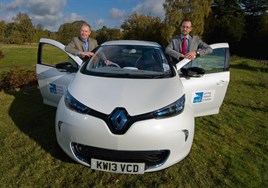 Renault’s electric supermini Zoe has been adopted by the RSPB and will join the charity’s other electric Renault, a Kangoo Van ZE, at its Bedfordshire base near Sandy.

The RSPB (Royal Society for the Protection of Birds) believes climate change poses the single biggest threat to the long-term survival of birds and wildlife.

As such, it recently submitted a planning application for a single wind turbine on a field adjacent to its headquarters. In the future, energy created on site could be powering the new Zoe and Kangoo Van ZE renewably.

David Waller, RSPB’s head of central services, said: “As a wildlife conservation charity acutely aware of the potential impact of climate change, the RSPB is particularly committed to minimising its own CO2 emissions.”

Waller said its 300-vehicle fleet operation is an obvious area where reductions can be made and the new Zoe Expression is already having a positive impact.

He added: “The operational success of the two electric Kangoo Vans, one being in London, definitely influenced our thinking when considering the Zoe. As a charity with limited funds, the price point was another positive factor in our decision.

“Clearly, we have to ensure the vehicle is utilised realistically and within its range capabilities, but they are sufficient to cover many of the business journeys made by staff. So far the Zoe has proved very popular with drivers.”