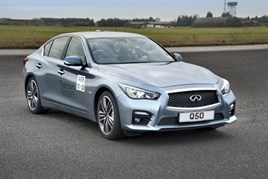 The Infiniti Q50 has proved itself to have one of the most advanced standard fit collision avoidance systems according to Thatcham.

Thatcham's chief executive Peter Shaw said: "The majority of accidents on our roads are caused by driver distraction often at junctions. Autonomous Emergency Braking (AEB) systems can warn the driver of the potential danger ahead and then automatically slow the vehicle down or even bring it to a complete halt if necessary.

"At Thatcham we assess these systems in the insurance group rating 'City' test on behalf of UK insurers to evaluate their performance in the most common type of crash: the front-to-rear shunt.

"In the test we drive the car under robot control at speeds of up to 30mph toward a unique soft target representing another vehicle, and we measure how well the car performs at avoiding a crash or reducing the impact speed.

"The Q50 not only avoided the crash at the maximum 30mph test speed, the Infiniti engineers were confident that it could also do the same at 37mph, and so it proved. This is a remarkable achievement and as such the Q50 is one of the best performers we've seen to date."

Fintan Knight, vice-president for Infiniti Europe, Middle East and Africa added: "Today's drivers need all the help they can get to stay relaxed, comfortable and safe behind the wheel which is why the Q50 is available with many innovative new safety systems."