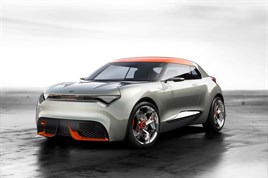 Described by Gregory Guillaume, chief designer at Kia’s European styling base in Frankfurt, as “an emotional and muscular car aimed at delivering pure fun and performance for today’s city-based enthusiast driver who longs for the curves of the open road,” the Kia provo combines a 1.6-litre Turbo GDi engine producing 204 ps with smart-4WD-hybrid technology from an electric motor delivering an additional power surge to the rear wheels when required and also allowing low-speed electric-only motion.  A seven-speed DCT transmission – Kia’s first – completes the technical package.

Guillaume went on: “This is entirely a car for European tastes and conditions.  Designed purely at our Frankfurt studios the provo was conceived as a confident and single-minded statement of dynamism and energy to deliver a new sense of fun into the B-segment.  The potent shaping displays a balanced and refined outline within a compact overall shape and the tiny front and rear overhangs enhance the balance within its proportions.”

There is no specific production schedule for provo on the calendar at this time.

Click Here to keep up to date with all the Geneva Motor Show news, video and unveilings in our dedicated section