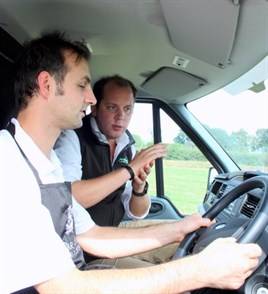 Fleets have now purchased and installed over 2,000 units of the Lightfoot driver behaviour system.

With fleets witnessing an average of 10-14% increase in MPG after installing Lightfoot, the technology has already saved users an estimated total of £1m in fuel and 1,493 tonnes of CO2 emissions in the past 12 months.

One company, which installed 100 vans with Lightfoot, also recorded a 50% drop in own-fault road traffic accidents.

“Based on our real-world data, we know that a fleet of 50 vans each travelling around 20,000 miles a year would save on average more than £18,000 per annum by using Lightfoot.

“Typically, this means our technology generates a return on investment within six months.”

Ashwoods is showcasing Lightfoot at the CV Show 2013. It has recently expanded its offering so the technology is now also available on Peugeot and Iveco light commercial vehicles (LCVs).

Lightfoot advises the van operator on how to drive in a more efficient manner, with the help of real time audio and visual aids. It also monitors performance and sends a simple email report to the fleet manager on a weekly or monthly basis.

The savings are more sustainable than stand-alone driver training, says Lightfoot, because it provides guidance every day – drivers tend to slip back into bad habits after training.

It is proactive, rather than reactive like most telematics or ‘track and trace’ systems, which identify issues that fleet managers then have to deal with.

Also, because the work is done in the cab, the reporting system is simple and requires little of the fleet manager’s time.

Fleet managers use the report to easily evaluate what support their different vehicle operators need.

For example, some drivers may deserve recognition for efficiency while others might need additional driver training if their performance shows room for improvement.

Along with saving fuel and lowering fleet CO2 emissions, other benefits include less wear of the engine, brakes, tyres and clutch, which could lead to higher residual values; and less road traffic accidents, leading to lower insurance premiums and vehicle downtime.

Lightfoot is a non-invasive system that can be fitted in minutes. It does not impact on vehicle warranty or re-sale/residual values.