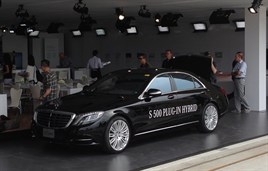 Mercedes-Benz will launch a 74g/km version of the S-Class in 2014, but a decision to introduce it in the UK has not yet been made.

The plug-in hybrid would qualify for a discount on the London congestion charge as well as the lowest rate currently available for BIK tax.

However, as the threshold is set at 75g/km for both incentives, Mercedes-Benz would have to ensure that CO2 does not increase for homologation to right-hand drive markets to maintain its appeal.

The new S-Class will arrive in the UK in October with the diesel S350 Bluetec and petrol S500 as well as a petrol-fuelled S400 hybrid. In March 2014 the S300 Bluetec hybrid will arrive, with CO2 emissions of 115g/km.

The S400 hybrid has competitive CO2 emissions with the BMW ActiveHybrid 7 and Audi A8 Hybrid, but the S300 Bluetec would be class-leading. However all versions would still be liable for the full London congestion charge.

But Mercedes-Benz will also launch the S500 Plug-in Hybrid in 2014, and Mercedes-Benz officials in the UK are hoping the ultra-low CO2 model will be introduced here.

The S500 Plug-in Hybrid would offer a short range of zero-emissions driving, but also have a petrol engine to ensure a longer travelling range if required.

The model, which would be priced at the top end of the S-Class range, has slightly reduced luggage space compared with other variants because of the room needed to store the battery.

Fleet Poll
Have you recently received an incorrect tax code for a company car from HMRC?
Vote
View all
61