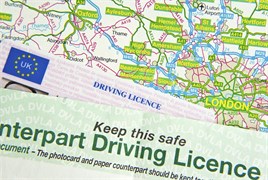 How and when companies will be given access by the Driver and Vehicle Licensing Agency (DVLA) to an online licence-checking database looks increasingly unclear.

The DVLA told Fleet News it remains committed to developing an online portal for fleets to check if employees are eligible to drive.

However, with the removal of the paper counterpart from January 1, 2015, drawing ever closer, the DVLA's ability to deliver a secure system for up to three million businesses is being questioned.

Malcolm Maycock, managing director of licence checking company Licence Bureau, believes the Government agency lacks the necessary experience or expertise to give businesses what they want. “It’s not what the DVLA was created for,” said Maycock.

“It was created for dealing with the individual, the end-user, to buy a tax disc, to get their driving licence and to register their car, something which it does brilliantly.

"But it’s going to have to deal with anywhere between 1.5 million and three million businesses; the data security risk and the potential for abuse are huge.”

The Government announced in 2012 that, as part of its ‘red tape challenge’ to cut bureaucracy, the regulation requiring drivers with a credit card-sized photo driving licence to hold a paper counterpart would be removed.

However, that poses a problem for fleets and the vehicle rental industry.

The paper counterpart is used by the majority of companies (52%) to check employee’s driver category exemptions and endorsements, according to a Fleet News poll.

The rental industry would no longer be able to give licences a quick check before agreeing to rent a car to corporate or retail customers.

With more than 10 million hire transactions every year, the BVRLA says a cost-effective, viable licence-checking alternative is vital.

No timescale agreed by DVLA over licence checking system

However, when fleets and vehicle rental companies will be given access to the new licence checking system remains unclear.

The DVLA has not agreed a timescale to deliver fleets the promised online portal, but it told Fleet News it is still “committed to abolishing the paper counterpart by 2015”.

A DVLA spokesman added: “We will have electronic enquiry facilities in place so those with a right to see the information that is contained on the paper counterpart will still be able to see it when we get rid of the paper document.”

The DVLA is close to launching phase one of its Integrated Enquiries Platform (IEP), which has been driven by a desire to lower insurance premiums.

The free-to-use View My Driving Licence service is currently available to test on the Government website – www.gov.uk/view-driving-licence.

It anticipates up to half-a-billion hits from the insurance industry and six million enquiries from drivers per year. It is expected to go live in June.

It is looking increasingly likely that this service, which is accessible only by the driver, will have to fulfil a licence-checking role in the short-term.

That is despite DVLA assurances to the BVRLA that the paper counterpart wouldn’t be removed until a suitable alternative is in place and concerns that a printout provided by the driver could easily be manipulated.

Nora Leggett, BVRLA head of member services, said: “The BVRLA is liaising with the project team to ensure the vehicle rental industry gets appropriate access to data with adequate data protection.”

But she added: “Full data and system implications are not yet known.”

Phase two of IEP, which is expected to give the rental industry and fleets online access, is “only in the early stages”, according to the DVLA. There is also a watered-down commitment on the Government website, with the DVLA project team talking only about “possible” access to data for car hire companies, police and other European governments in phase two. No mention is made of fleets.

Maycock believes the Electronic Driver Entitlement Checking Service (EDECS) user group – the licence checking industry body of which he is chairman – is best placed to work with the DVLA to provide the service.

Companies that provide licence checking services such as Jaama and the Licence Bureau charge fleets to check an employee’s entitlement to drive.

But Maycock doesn’t believe the introduction of an online portal for fleets direct from the DVLA would impact demand for their services.

Licence Bureau already has 12,000 customers, with more than 400,000 drivers on its database and has carried out more than a million checks since creating the industry 10 years ago. It is expected to hit 1.5m checks by the middle of next year.

EDECS users as a whole currently deal with the records of two million employees – 25% of all business drivers, according to Maycock.

He has ambitions to grow its market share further. Licence Bureau has just launched an integrated compliance tool for licence checking and risk management.

The EDECS user group will meet again with the DVLA in July after its latest meeting at the beginning of May showed little progress to an industry accessible online portal.

Fleet News and ACFO, the national body for fleet decision-makers, will be hosting a debate to provide much-needed clarity around changes planned by DVLA.

The special seminar will take place at the Fleet News Company Car in Action event from 2pm on Tuesday, June 10.

Representatives from the DVLA will give attendees an overview of how its services are changing and how they will be delivered.

There will also be a question and answer session giving fleet professionals the opportunity to find out for themselves how the changes will affect their own particular business.

ACFO chairman Damian James said: “Whether it’s the abolition of the tax disc or the removal of the paper counterpart, it’s imperative that fleet operators understand how the changes planned to DVLA services will affect them and their drivers, and how they need to prepare.

“This debate provides an excellent opportunity for any organisation that manages a fleet of vehicles to hear direct from the DVLA what’s being planned and what they need to do to ensure they’re compliant and they continue to meet their duty-of-care obligations.”

For further information and to register for a free place, email kate.howard@bauermedia.co.uk or call 01733 468146.