Pricing announced for Audi A3 e-tron 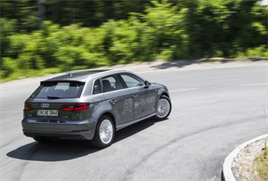 The first e-trons will arrive with customers in early 2015.

The vehicle is powered by a modified 1.4-litre TFSI unit, in this application featuring a peak power output of 150PS, is linked by a clutch to a 75kw electric motor, which is integrated into a specially developed six-speed S tronic transmission sending power to the front wheels.

According to the ECE standard for plug-in hybrid cars, the A3 Sportback-based e-tron is capable of covering up to 176.6mpg with CO2 emissions of just 37g/km. With the combination of electric motor and combustion engine, an overall operating range of up to 584 miles is possible.

The Audi A3 e-tron can run exclusively on electric power for up to 31 miles at speeds of up to 81mph, or can be powered by petrol combustion alone. Alternatively, the hybrid mode brings both units into play, and the driver can choose to run these simultaneously - a function known as 'boosting' - by initiating kickdown by the S tronic transmission.

Using a domestic socket it takes four hours to fully charge the battery. When a wallbox is connected or a public charge point is used this reduces to two hours and fifteen minutes.