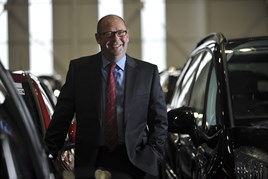 Manheim has promoted current chief operating officer, Michael Buxton, to the role of chief executive officer over its operations in the UK, with effect from September 10, 2014.

Buxton will continue to report into John Bailey, whose responsibilities at the global automotive services company have been expanded, as he recently stepped up to a new role as executive vice president of international operations within parent company Cox Automotive.

Bailey said: “Michael’s promotion to chief executive recognises his significant contribution over 20 years in Manheim and I know that our UK operations and customers will greatly benefit under his leadership.

“I will still be actively involved with Michael in the UK domestic market and look forward to working closely with him as our businesses go from strength to strength.”

He is a proven and capable leader and his guiding hand will ensure we achieve our UK growth objectives at this very exciting time in the development of Cox Automotive.”

Manheim UK is part of Cox Automotive, one of the world’s largest providers of automotive services to fleets, motor dealers, vehicle manufacturers and traders across cars, motorcycles, plant and commercial vehicles.

Cox Automotive, which employs over 20,000 people in 107 locations worldwide, is a division of the family-owned Cox Enterprises global group of communications, media and automotive services providers.

Manheim’s fully integrated product and service offering drives every stage of the used vehicle lifecycle, supporting the sale of more than 8 million used vehicles worldwide each year and facilitating transactions representing more than $50bn in value.