Wireless charging: switch on to concept of not plugging in 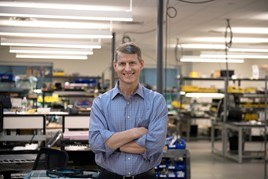 Bloomberg New Energy Finance predicts that 559 million electric vehicles (EVs) will be on the road by 2040, while IHS Markit says that more than 33 million autonomous vehicles (AVs) – which will be electric – will be sold globally in 2040.

This future of mobility will consume more electricity than the grid has ever had to handle. However, EV batteries themselves can help alleviate this problem.

EVs can store excess energy, providing it back to the grid through vehicle-to-grid (V2G) technology. V2G allows power flow between the vehicle’s high-power, high-capacity propulsion batteries and the grid.

This technology can balance the supply and demand on the grid that is expected to accompany the shift toward electrified, autonomous vehicles.

Utility companies can offer monetary incentives like reductions in utility costs for consumers that provide the grid with power.

However, for V2G to be successful, automakers need to provide consumers with the technology that enables a smooth transition alongside the mass adoption of EVs.

Wireless charging technology will enable the electric and autonomous future of transportation for V2G.

Wireless charging, based on magnetic resonance technology, allows EVs, no matter the type or size, to automatically and safely charge by flexible positioning over a source pad, even through materials like concrete, asphalt and ice.

The wireless charging pad can be installed above the ground or flush mounted into the floor of a garage or road. Wireless power delivers the same charge speeds and efficiency levels as traditional plug-in charging methods.

Wireless charging is an added convenience for EV drivers adopting V2G, as consumers can still give back to the grid by plugging in. For self-driving cars, without a driver to plug in or implement V2G, wireless charging becomes a necessity.

With mass adoption of electric and autonomous vehicles right around the corner, utility companies and automakers need to prepare to implement V2G – only made widely possible by wireless charging.