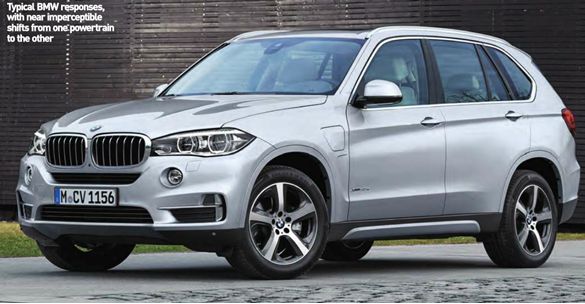 BMW’s ‘i’ revolution has been under way for well over a year. The i3 is gradually becoming more visible on our roads, especially in towns and cities, while the £100,000 i8 plug-in hybrid high-performance car is still rare enough to attract attention whenever we catch a glimpse.

The main BMW line-up has lacked a plug-in car up to now, but that is about to change. Customers can now order a BMW X5 plug-in hybrid offering significantly reduced CO2 emissions, as well as improved fuel economy on short journeys when using the charged battery.

It uses a turbo-charged four-cylinder petrol engine, with a similar specification to a 328i, in conjunction with an electric motor.

The total system power output is 313hp, with CO2 emissions from 77g/km – around half the level of BMW’s four-cylinder diesel X5.

It’s competitive on CO2 against the Porsche Cayenne S E-Hybrid, which has emissions of 79g/km, albeit with a higher overall power output of 420hp.

But Volvo’s new XC90 T8 plug-in hybrid has CO2 emissions from 49g/km, putting a significant distance between itself and rivals, in BIK tax terms as well as CO2.

Therefore BMW has decided to lead on list price (it’s not too often that you’ll read that), to ensure it has a clear incentive for being chosen, beyond the premium badge appeal, quality and practicality it would share with rivals.

And, while it might be short of power compared with some rivals, it isn’t exactly slow. The 0-62mph sprint benchmark is covered in 6.8 seconds.

It takes less than three hours to charge the battery using a BMW i Wallbox, and it will run on pure electric power for up to 19 miles. It’s also possible to reach 75mph in pure electric mode. Two versions will be available (with deliveries starting in November). The SE, priced at £51,845 on the road has 18-inch wheels, two-zone climate control, adaptive comfort suspension, front and rear parking sensors, part-electric front seat adjustment, leather upholstery with heated front seats and automatic tailgate.

The car is refined with near imperceptible shifts from one powertrain to the other. It’s also possible to save battery power for later or recharge from the engine while driving. It behaves on the road like we’ve come to expect from the X5, with typical BMW responses despite its size.

It’s just a shame that, compared with the XC90, CO2 is low enough to make a difference on BIK tax, but it isn’t low enough to qualify for the plug-in car grant.