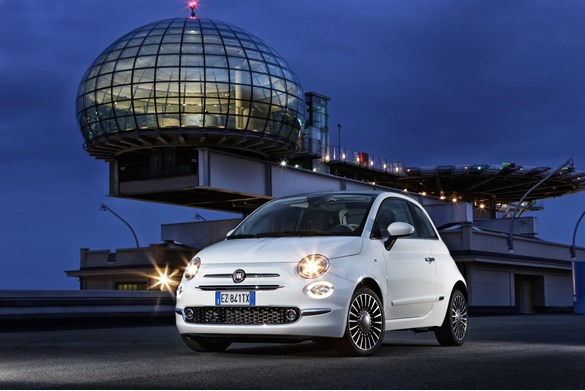 A team of stylists, designers and engineers came up with more than 1,900 modifications after being tasked with giving a fresh lease of life to Italy’s best-loved small car.

But only aficionados will be likely to spot the differences between old and new when the latest Fiat 500 reaches showrooms later this year.

Eight years after the friendly runabout from the 1950s burst back on the scene to become an automotive fashion icon with enough street cred to rival the Mini, the smash-hit baby car’s looks have changed little.

Remarkably subtle makeover treatment has made sure that the styling introduced in 2007 remains essentially unaltered, with only deft changes to headlights, grille and bumper to promote a more assertive frontal appearance while, at the rear, elongated trapezoid lamp clusters with body-coloured centres and a low-mounted strip for the fog and reversing lights suggests a wider stance.

Elena Bernardelli, Fiat UK country manager, said: “Some people may regard the change in appearance as light, but this is an iconic product and the fact that the new car looks so much like the old one is a big plus as far as I’m concerned. Making just minor changes on the outside was the right action in this case.”

In an interview, as the range was shown to the media in Turin, she told Fleet News: “I was quite worried when I heard about this project because the 500 is a particularly emotional product and I thought we had a situation much like the one facing Volkswagen when the time came to relaunch the Beetle. But I am very happy with the result and I think our customers will approve.”

Also situated higher on the dashboard is a touchscreen infotainment unit featuring hands-free calling and music streaming, voice recognition and the ability to read text messages received on compatible phones. A voice-activated navigation system, including digital radio, will be a £350 option.

Not surprisingly, the 500 feels much the same as before out on the road and its motor needs to be worked hard to keep pace with accelerating traffic. However, adding extra soundproofing has cut noise levels and the car is quiet and relaxed at cruising speeds.

But what it lacks in brio, it makes up in equipment. It comes with a glass sunroof, rear parking sensors, front fog lamps, smart alloy wheels and a leather-trimmed steering wheel as standard, although it still lacks a  fuel-saving stop-start system.

Corporate business accounted for only 5% of the record 44,000 registrations achieved by the Fiat 500  last year (although 30% went to fleet, mostly Motability and rental), but Bernadelli believes there is scope for improvement. “There is a user-chooser market for this car and it is being bought by companies, although the style of the product is of particular significance. 80% of our customers are women, so emotion is a major factor here rather than the cost of monthly repayment terms. Our major competitor is the Mini, but we still have a commanding leadership position despite the arrival of many new A-segment rivals in the last eight years, including the Volkswagen Up,” she said.

Two extra engine options are expected to be offered soon after the 500 goes on sale in September – an eco version of the 69hp petrol unit returning 99g/km and an 89g/km version of the 1.3-litre Multijet diesel.