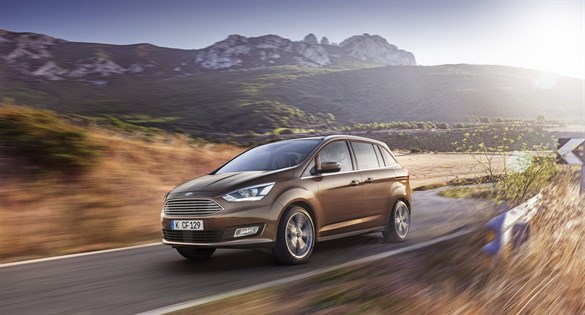 The UK loves seven-seat people carriers. The Citroën Grand C4 Picasso is more popular here than the five-seat version, unlike some other markets in Europe. Likewise the Volkswagen Golf SV, and its predecessor the Golf Plus, are a far rarer sight on our roads than the Touran.

But with Ford’s compact people carrier range, it’s the five-seat C-Max that outsells the seven-seat Grand C-Max. Ford puts this down to the fact that customers have a choice of larger seven-seat models in its range – the S-Max (more of which in a later issue of Fleet News) and the Galaxy.

Both the C-Max and Grand C-Max have been facelifted for 2016, and the first examples will arrive in showrooms around the same time as the new S-Max in late summer.

The C-Max family gains new technology and engines first seen on the revised Focus range last autumn, which means the best-selling derivatives will be the new 120hp 1.5-litre TDCi engine with CO2 emissions from 105g/km. Not as good as the sub-100g/km available on the Citroën C4 Picasso, but not too far off. With the revised model, upgrading to a seven-seat Grand C-Max is an extra £1,600 – and choosing an automatic over a manual adds £1,250.

Zetec is the entry-level equipment grade on the C-Max and, as well as alloy wheels, digital radio, Quickclear windscreen and other features on the outgoing model, the revised version also adds hill-start assist and, interestingly, a space-saver spare wheel instead of a puncture repair kit – perhaps one of the reasons CO2 emissions aren’t quite as low as the Citroën.

Titanium X models have these features as well as adaptive headlamps as standard.

Our test model was the new 150hp 2.0-litre TDCi, and within a few metres of setting off it was evident that Ford’s upgraded noise absorption features – thicker side glass, more insulation under the carpets and in the wheel arches – have made the C-Max among the quietest cars in its sector. The neater exterior styling is repeated inside, with less clutter on the dashboard, and the C-Max, despite its high sides compared with a conventional hatchback, always feels safe and surefooted on the road.

Optional features with the revised car include a new assisted perpendicular parking system (as well as parallel parking), while the Sync 2 system understands voice commands such as “I’m hungry”, and offers options on finding places to eat in the vicinity, on the sat-nav route or around the destination.