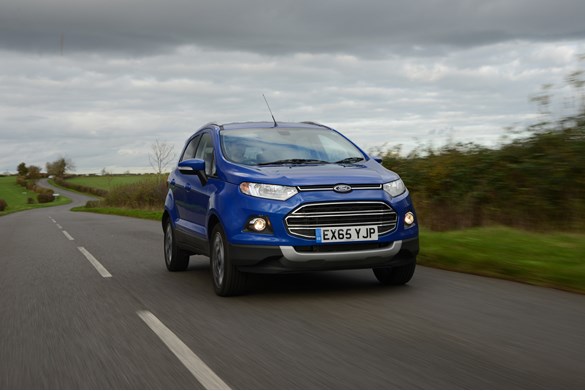 The model was up against strong competition – the Nissan Juke, Peugeot 2008 and Renault Captur, with market entrants from Mazda and Fiat arriving in the meantime – and the EcoSport just didn’t stack up.

The Fiesta and Focus sister models had a reputation for good driving ability and comfort, and the EcoSport seemed to have forgotten the family trait a little. To Ford’s credit though, just over a year later, an upgraded model is on sale that takes into account feedback from customers and the press.

Some of the biggest weaknesses of the original model included poor handling and ride, a noisy cabin and interior finish that wasn’t the finest. Little more than a year after launch, the updated model primarily improves driving ability and comfort.

The interior appears familiar at first glance – borrowing heavily from the Fiesta supermini the car is loosely based on. However, tough but scratchy surfaces have replaced soft-touch plastics. They may look OK from a distance, but get close and it all starts to feel distinctly utilitarian – a shame when the fit and finish is actually rather good.

Other plastics have had a bit of a spruce-up, with a little more piano black and the odd chrome embellishment.

This Titanium test model has a swathe of part leather on the otherwise pretty basic seats – padding is there, minimally, and the seats are a little flat.

Ford has done a great job improving noise and handling. After a back-to-back drive with the old model, the new car feels a lot more planted on the road, there is considerably less road noise, and the steering feels far more connected to what the car actually does.

On the outside, the most noticeable change is the removal of the spare on the back – the number plate is now centrally mounted, and the design feels a little less dated. You can still spec the boot-mounted spare for £100,  which may be of interest to fleet managers, as otherwise you get a tin of foam and a pump.

The peppy 1.0-litre 125hp three-cylinder turbocharged petrol engine in the model we tried emits 125g/km CO2, and achieves 52.3mpg on the combined cycle. While only paired with a five-speed gearbox, it offered plenty of power and, coupled with the noise dampening improvements, gave a reasonably quiet cabin experience.

There is a 95hp, 115g/km diesel, but this is a tad less refined – and the benefit-in-kind tax payable on the petrol model works out £64 less a year.

Tech spec is a little mixed:  keyless entry, cruise and climate control are all present, but digital radio is a notable omission. Ford’s infotainment system, with its monochrome blue display, is starting to feel a little dated compared to the touchscreen options in rivals, but there is something to be said for the use of a button you can feel without having to move your eyes off the road.

Ford also gave us a preview of the new Titanium S trim level, arriving on British shores next year.

This sporty model has improved handling and suspension, removes the roof rack and gains some gloss black finishing on the alloys, roof and bodywork.

The trim will be exclusively available with the 138hp 1.0-litre ecoboost turbocharged petrol engine. It’s a great little engine in 125hp form, so the additional power in this model can only help performance.

Digital radio finally shows up on this variant, paired with a Sony head unit, and there’s also the addition of a reversing camera.

Despite being sportier, the car feels like a more complete package as a whole, and ride doesn’t suffer. The suspension is a little lower, and it feels like you’re perhaps a little less susceptible to wind buffeting.

It’s clear that the changes made by Ford, both in the current model, and next year’s additional trim, make a huge difference to the appeal of the car. Competitors may still have the edge, but it feels like the Ecosport is slowly beginning to catch up, both with rivals and the rest of the otherwise excellent Ford range.