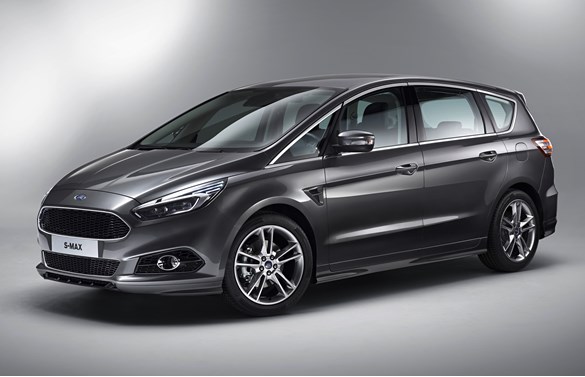 The S-Max has always held a privileged position in the people carrier world. When it was launched in 2006 (the same year as the current Galaxy), it was related to the Mondeo that would appear a year later.

And while the Galaxy was intended to compete as a workhorse people carrier – the private hire vehicle or airport taxi – the S-Max was meant to appeal to the company car driver that needed seven seats, but who would rather be driving something else.

The new S-Max will arrive in the UK in late summer, around the same time as the revised C-Max and Grand C-Max, and a short while before the Galaxy that will complete the renewal of Ford’s MPV/people carrier line-up. If you include the B-Max and the van-derived models, there will be eight models in total.

The current S-Max remained popular even at the end of its life. That ability to offer occasional seating for seven along with sharp responses on the road often outweighed its inability to keep up with the latest advances in reducing CO2 emissions and safety technology.

The lowest CO2 emissions the outgoing model could offer was 139g/km, as a result of slotting the 115hp 1.6-litre Ford-PSA diesel under the bonnet.

The new S-Max can better that, using the latest generation 2.0-litre diesel as used in the Mondeo and Kuga. Customers can choose 129g/km versions of the S-Max using either 120hp, 150hp or 180hp variants, although adding automatic transmission and optional all-wheel drive on the two higher-power variants sees CO2 creep upwards.

There is also an auto-only bi-turbo 2.0-litre diesel, producing 210hp and CO2 of 144g/km and, while its emissions are higher than the important 130g/km writing-down allowance threshold, its fuel economy is higher than 51mpg on the combined cycle.

Petrol versions are available, but are unlikely to be a part of a company car fleet in the UK.

The manual 180hp 2.0-litre TDCi we drove on the event certainly didn’t feel short on performance. It has a sophisticated feeling interior, with soft-touch materials on the dashboard and doors. Ford has given greater attention to colour matching materials to create a more upmarket feel.

The S-Max continues its predecessor’s on-road feel: engaging and responsive, with neat turn-in and reassuring body control. The business end of the car is more practical than before, with easy-fold functions for second and third-row seats with buttons inside the tailgate.

Given the continued popularity of its predecessor, the changes made to the S-Max will strengthen the appeal of the new model that will most likely remain as the driving enthusiasts’ choice in the sector.