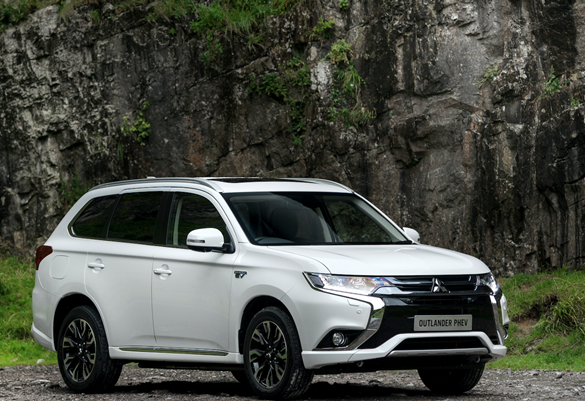 It isn’t too long ago since the Mitsubishi Outlander PHEV arrived on the market and immediately boosted the numbers of plug-in vehicles on UK roads.

Based on the Outlander that arrived in showrooms early in 2013, the plug-in hybrid model certainly still feels quite fresh.

In its first year on sale, more than 10,000 Outlander PHEVs were registered, and the combination of seats for five adults, a big boot, elevated driving position and very low BIK tax liability relative to the vehicle’s size and price have ensured its appeal.

But we’ve reached the mid-point in the lifecycle of the current Outlander and both diesel and PHEV models have undergone a number of changes.

The most obvious will be the distinctive new look, with sharper, more coherent styling at the front, and a theme we’re likely to see on future Mitsubishi SUVs.

The interior looks a bit smarter and the audio/navigation interface is active after 15 seconds of starting the car, rather than the 30 seconds it took previously.

For the PHEV, there is a modest reduction in CO2 emissions along with an improvement in the official fuel economy figure from 148.8mpg to 156.9mpg calculated from the test cycle.

Mitsubishi claims quicker acceleration at low speeds, although the 0-62mph time of 11 seconds suggests that will all the various motors, battery and four-wheel drive technology on board, the Outlander doesn’t feel that fast in the conventional measurements.

As before, the Outlander PHEV will travel up to 32 miles on electric power alone and can run on electric at motorway speeds, although prolonged high-speed driving will reduce the range. There is a 2.0-litre petrol engine ready to take over propulsion duty when the plug-in charge has run out, and the Outlander will then drive like a conventional hybrid, with EV running available at low speed for short distances to help boost fuel economy.

It feels quite removed from a conventional 4x4 to drive, with pretty responsive and precise steering (if lacking a little in feel), and reassuringly stable behaviour when cornering, although the suspension does crash a little too much over sudden bumps in the road.

Specification has been improved across the range and a new grade – GX3h+ –  sits between the entry-level GX3h and GX4h versions. The GX3h+ includes the remote functionality previously offered only on higher grade models, as well as heated front seats and a pre-heater that can run when plugged in.

New standard features on the GX4h include a 360º camera for parking and LED headlamps. GX4hS has adaptive cruise control, autonomous emergency braking, lane departure warning and an unintended acceleration prevention system – which can prevent crashing from a standstill should drive or reverse be selected accidentally.