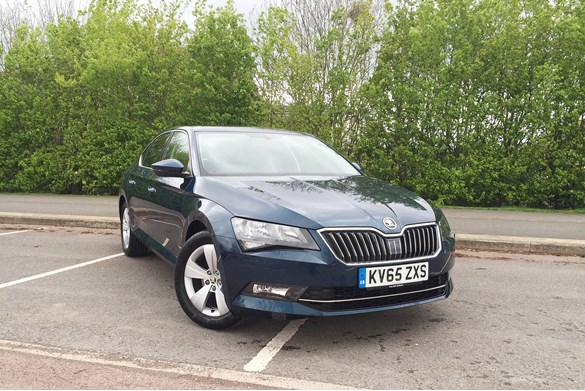 When a sunny day turned into a downpour recently, any complaints I might have had about the Superb disappeared in an instant.

We were spared a drenching by the umbrellas Skoda subtly hides in the front two doors – a brilliant idea given the UK’s weather.

That said, there are few complaints at all. The Superb has one of the best sat-navs on the market (though my one quibble is with the extra screen on the dashboard behind the steering wheel. It minimises eyes-off-road time, but the graphics are confusing) and an easy-to-use SmartLink multimedia system which controls functions, including phone, via the touchscreen.

After reading experiences of trip computers differing from actual fuel consumption, we did our own test on the Superb. The difference was far less than most: the 59.5mpg trip average was overstated by only around 3mpg, or 6%.

In general, the trip is averaging just over 60%, rising to high 60s on longer journeys, against the official consumption claim of 68.9mpg. It suggests our real average is just under 60%, which is reasonable for such a large car.

I’m convinced that with some efficient driving, the official figure can be achieved. The gauntlet has been laid down; find out the results in the Superb’s final test next month.