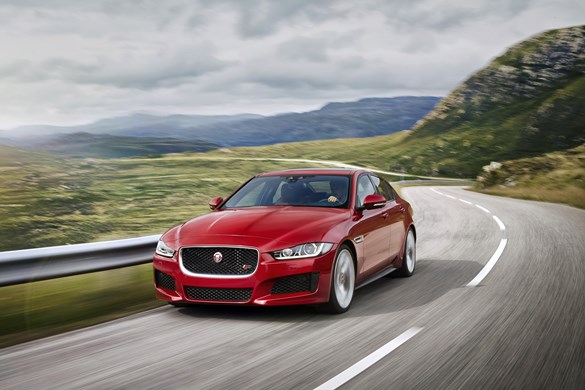 The Jaguar XE is arguably the best driver’s car in the sector. There, I’ve said it. Controversial perhaps, given the historic supremacy of the BMW 3 Series (recently facelifted and tested in Fleet News September 17), but the XE is a real delight to drive.

Direct, accurate handling, responsive and assured when pushed and with an accommodating chassis which delivers the right combination of absorption and firmness (although some colleagues have suggested it’s too firm), the XE barely put a foot wrong during our week-long test.

Having already driven this car on the international launch in April, this was the first opportunity to test the 99g/km 163hp entry-level version (actually, it wasn’t – we had the auto version, more of which shortly). It was also the first chance to swap the smooth tarmac of northern Spain for the potholed roads of the UK.

The 163hp engine will be the most popular fleet car, taking around 60% of registrations, with the 180hp 109g/km engine, previously tested, accounting for the rest.

The lower emitting model has created the headlines with its official 74.3mpg, although it’s worth noting that these figures are for manual only – the auto we tested is 106g/km; 68.9mpg. That’s in contrast to the BMW 3 Series, where 99g/km is for the automatic, the most popular transmission choice in the segment.

So, how did we fare during our seven days? We averaged 56mpg and topped out on a longer journey at 61mpg – 11% below the official figure, which is a decent result.

The lower power output was noticeable, even though the paper figure (0-62mph in 8.4secs) is only 0.6secs slower than the 180hp’s 7.8secs. It showed most during mid-range performance and foot-down overtaking, but generally there was sufficient power on tap for an enjoyable drive.

Any quibblers need to remind themselves of that 99g/km or 106g/km CO2 emissions figure.

The auto box is excellent – effortless, quick changes – although the BMW just beats it. Handling is direct and well-weighted while the ride is firm but not jarring – the suspension has been engineered, says Jaguar, to sit at a mid-point between sporty and comfort in the segment. It’s pitched perfectly, better even than the 3 Series.

While some media sceptics question whether Jaguar will be able to handle high volumes without distressing the market, the guides have no such concerns. The XE has  the strongest residuals in the class at 32.3%, ahead of  the all-new A4 (31.4), refreshed 3 Series (26%) and C- Class (29.5%).

So full marks for Jaguar on its return to the premium car segment – well, not quite. The car is let down slightly by the lack of rear legroom and a small boot – just 455 litres compared to its competitors, which all have 480 litres.

Nevertheless, it will be a popular selection if added to your choice list.