Alphabet: ‘Focus on the customer and quality of service’ 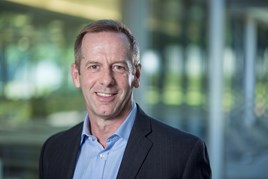 Valuing the customer and quality of service: these are the twin virtues that Alphabet chief executive Nick Brownrigg aims to embody as he builds his strategic vision for Alphabet.

“Be indispensable to our customer – if we are, we have nothing to worry about; our competitors do,” he says.

Brownrigg was appointed 16 months ago after a 30-year career in leasing and automotive which took in senior roles at Masterlease, Interleasing and, latterly, ALJ, the Middle East’s largest automotive group.

Approached by a headhunter, he had “an immediate sense of excitement”.

“Alphabet as I remembered it was a refreshing brand with a reputation for innovation around mobility,” Brownrigg tells Fleet News. He was hooked.

His first day in the job “was huge”. Alphabet had recently moved to new facilities in Farnborough, Hampshire, on a site also accommodating BMW and Mini UK head offices – the three sister brands share equal billing.

Brownrigg had expected to meet some of the staff over the course of his first few weeks. Instead, he was bundled into the auditorium and invited to address the entire workforce.

“The impression I got as I looked out at the employees was that we have an eclectic mix of experience and youth, and abounding energy,” he says.

Brownrigg talks enthusiastically about his expanding workforce (430, with 100 recruited in the past 12 months) and the working environment Alphabet seeks to provide.

He recognises that his twin aspirations cannot be achieved without the right people who are highly motivated and engaged with his vision.

It starts with the new head office, which presents the ultimate in flexible working. No one has a desk; they choose where they wish to sit each day on a first come, first served basis.

There is no dress code, provided staff show respect for the business and for any visitors. And, most interestingly, they work their own choice of hours per week.

“We give them our trust to work in the flexible environment,” Brownrigg says.

Alphabet has been subjected to some negative comments from fleet customers in recent years about its service levels. Brownrigg doesn’t shirk from responding to the criticism.

“We have taken steps to reorganise over the past 12 months to split the sales operations and created a frontline desk which has helped hugely,” he says.

“There is a lot further we can go to improve our sophistication and measurement but our focus has been on recruiting talent into the organisation.”

Alphabet was already addressing the issue prior to Brownrigg’s appointment.

It is investing six figures over three years in Perfecting Alphabet Customer Experience, or ‘Pace’, which encapsulates the customer-first agenda.

Brownrigg says: “We have built strategy on customer focus, leading with our talent.”

His strategy sits within a 10-year view of the business and includes a “bridging strategy” intended to get Alphabet into a position where customer excellence and an entrepreneurial approach to business become the norm.

The priority is to take a service-led approach to deliver balanced growth, while leading on mobility solutions.

Balanced growth means having a good risk spread across a wide number of business channels, product mix and lease terms.

Alphabet – like others in the sector – had been seduced into writing a lot of two-year business, particularly in personal contract hire (PCH).

Such contracts tended to be price- rather than service-led and two years was the tipping point for many small business owners and mid-size fleets.

“The incredible price offers we were seeing didn’t appear to be sustainable,” Brownrigg says.

“We have made heavy investment in a number of areas, not least in our risk area with residual value (RV) forecasting and management. Now we are writing a lot more three- and four-year business with a greater focus on service.”

Last year, Alphabet was writing around 40% of new business on two-year contracts; this year it is less than 20%, helped by a big push into the corporate sector.

“Corporate is longer cycle business. On five years, the residual is shallower than two or three years so the leasing company is taking less of a risk if you get it wrong,” Brownrigg says.

The portfolio, thanks to the growth in longer-cycle corporate business, is “a lot stronger” than a year ago, according to Brownrigg.

“A third of our fleet has rotated onto the better profile of contract,” he adds.

It includes indirect channel business via brokers, which now numbers around 20,000 vehicles.

“We only work with brokers that have a small number of leasing companies; it’s not a panel approach,” Brownrigg says. And he is careful not to over-expose Alphabet to that market.

“A lot of our industry has moved significantly towards generating business through indirect channels, possibly to the detriment of corporate.

But while it’s your product, it’s not your customer. For the right customer, there is a justification for a direct approach and we have a proven model.”

Direct SME business has been maintained at around 30,000 units. The average customer is running fewer than five vehicles, while the upper threshold is 100.

Above that, the business is managed by Alphabet’s corporate team, which is divided into hunting (new business) and farming (account development).

Account development is split into two: consultative work with customers to minimise their costs and Customer First, which handles their day-to-day operational needs.

The structure, put in place in 2016, has helped to remove bottlenecks in solving and resolving customer problems.

“We now have an 80% first time resolution. It has helped to improve retention levels,” Brownrigg says.

Despite growth in many key channels over the past few years, one area of the business where Alphabet is under-exposed is light commercial vehicles (LCVs).

They account for just 12% of its total risk/funded fleet, compared to more than 20% for many of its closest competitors.

“We would like more LCVs on our fleet because the product type sells very well within our overall mix. That’s a focus,” Brownrigg says.

It mirrors his aspirations to grow further in the corporate sector.

He dismisses naysayers who claim the company car sector is in long-term decline due to rising benefit-in-kind (BIK) tax and alternative mobility options, claiming that while the total numbers might fall, “there will continue to be strong demand for the foreseeable future”.

The opportunity for Alphabet is huge, he believes. “We were not performing as a mature business in the corporate sector; the proportion of business we were generating was not high enough, but we are steadily progressing.”

Part of the solution comes back to talent: do you have enough and is it of a high enough standard.

“We lacked elements of expertise and we needed some simple changes to improve our capabilities,” Brownrigg says.

“We needed investment for digital and we got it. That has helped us to overcome some of the hurdles such as internal workflow for response times and reports for larger customers with better data analytics.”

It all comes down to the continued shift in emphasis from price-led to service-led differentiation.

“Our focus is to always differentiate more on service than price and that’s our investment in talent and people,” Brownrigg says.

Alphacity car sharing – a ‘viable alternative to rental and lease’

Alphabet is at the vanguard when it comes to mobility services. It launched AlphaCity car share in 2012, followed by AlphaElectric a year later and announced a partnership with online parking community Just Park in 2014.

Mobility nuances have changed, according to Nick Brownrigg. It used to be about providing the right car at the right time in the right place.

Now it is shifting to the right journey at the right time and the right price.

“We are a leader in car share and we work with customers to look at it as a viable alternative to rental and lease. We have customers that use all three,” he says.

More than 20 organisations are using AlphaCity in the UK, with more than 150 cars on the road.

The 4,000 active users had driven a cumulative 850,000 miles in the year to September, on course to beat the million miles driven last year, with each journey averaging 58 miles.

“We will extend our proposition. At the moment it is BMW only, but we will possibly include others over time,” Brownrigg says.

“Another area will be to help the customer to utilise other services, for example, hail and ride, in a manner that is simple. Our direction will be ‘one invoice to one company’.

Alphabet has revealed that it delivered 8.9% of the UK’s total number of ULEVs in 2017.