Iron Mountain: ‘We’ve never sacked anyone because of their driving’ 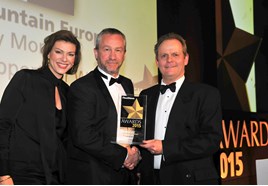 When a driver behaviour programme that originated in the UK fleet is rolled out to a company's other divisions it's a pretty good indicator that it has been a success.

Rory Morgan, head of logistics support Western Europe at Iron Mountain Europe, has replicated his UK roll-out across Western Europe, is currently working in Eastern Europe and is talking to colleagues in South America about a pilot scheme there.

Since the introduction of the programme – which uses a combination of GreenRoad telematics to monitor and report, and driver trainers to educate and improve – in 2010, Morgan has seen significant reductions in reported  incidents, accident claims and fuel spend across his UK fleet of 220 vehicles.

Fleet News: What was the motivation for introducing a driver behaviour programme?

Rory Morgan: I’d not long been national logistics manager, and our insurers, who had wanted to look at reducing our high accident rate several years ago, approached me.

They basically told us our premiums were going to rocket, because the company had evolved very quickly through acquisition, and the culture was of an information business, not a transport operation.

It was a project that needed me, with a transport background, and our risk manager to work together.

We brought in a comprehensive driver training prog-ramme – the previous scheme provided half an hour with an instructor every two years. We made sure the basic transport fundamentals were there, and provided a business plan with a return on investment.

You can’t just base it on safety and doing the right thing – there has to be a financial return.

FN: The GreenRoad telematics system you use heavily relies on scoring. Do your drivers compete with each other?

RM: Telemetry and driver training work hand-in-hand. You can’t just install it and walk away and have all your problems solved.

If a manager goes to a driver and just tells him to get better, it probably won’t do much. The driver needs to know what to do to get better.

Even the best telematics in the world probably won’t tell you everything you need to improve. You might get some tips here and there, but it’s no substitute for actual practical coaching with a trainer.

They will come back and question their scores with their managers, and review their drives.

I don't think we'd see quite the same level of success without giving them the knowledge and training to improve their driving.

FN: How have you incentivised good driving?

RM: We've very much taken the carrot approach and not the stick. The GreenRoad Elite programme has been running for three years, and for each year we've had the biggest percentage of drivers per company achieving the top level in the global chart.

Last year, a fraction short of 50% of our drivers gained entry to the programme (which rewards drivers with consistently high scores throughout the year) and this year we're on track for 60-65% of our drivers, so we're improving year-on-year.

They all get a pin badge – bronze if it's their first year, silver if it's their second, or gold if it's their third. Drivers receive a personal recommendation from me and a £50 high street voucher.

It is also heavily publicised internally. Every driver gets a certificate presentation and the message is shared through all our internal communications.

It gives them, quite rightly, a chance to puff their chests out. They are doing a good job.

We've categorically never dismissed a driver based on their driving performance. We've always worked with drivers and managed to make improvements.

We've also seen a significant reduction in the number of driving licence endorsements. That tells me that not only are they driving our vehicles more safely, they are driving their own vehicles better too.

That level of driving is now the norm – that's how they drive. You get little snippets of feedback from drivers saying they now fill up their car less often. We publicise bits of that, so there is an understanding of the personal benefits.

FN: Your role also encompasses fleets across Europe. How do they differ from the UK?

RM: I've been working across Europe for around four years.

In western Europe we now operate in a similar style to McDonald's. You can walk into our transport operation in Berlin and it will work in the same way as London. The paperwork, process and debriefs will all be the same – the only thing that changes is the language.

In eastern Europe, mostly it's about migrating best practice.

We've introduced all the best practice we've learned, tried and tested in the UK into Hungary towards the end of last year, and we're now beginning to look at Poland. Poland is our biggest single transport operation in eastern Europe.  It's still not huge – we're only talking about 45 vehicles, but if we can reduce fuel use by 10%, it's still a saving off the bottom line.

We're also talking to our American colleagues. They may be a bigger operation than us, but they're looking to little old Blighty as doing a good job.

We can still learn best practice from others. It's a democratic process.

I chair a workstream with our transport managers in western Europe, and we meet on a quarterly basis. It's given us good opportunities to make efficiencies throughout our internal processes.

FN: Are there any other developments on the horizon for your fleet?

RM: We've been looking at in-cab cameras, but they would be quite expensive to roll out and I'm not sure we can justify them. I like the idea of them and, had they been available when we first put telematics in place five years ago, we probably would have fitted them.

That said, we are about to start an upgraded telematics kit with ECU connection in 10 vehicles, and as part of that trial we are also testing cameras. From that, we'll be able to look at the risk reduction, and calculate if there is a return on investment. It's about having an open mind, and investigating the opportunities.

As Morgan's experience and expertise becomes recognised across the business, other divisions are set to take advantage of the savings and environmental benefits he has already proven across the next five years. Further improvements after significant reductions are always a challenge, but with an eye to the future, including a roll-out of Magnaflow fuel cleaner magnets which, have delivered a 5-8% increase in fuel economy in Iron Mountain's trials. It looks like there are still opportunities on the horizon.