Emissions Analytics: Living in the real world of emissions 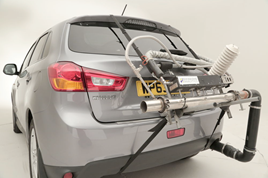 For years, accurate testing of fuel economy and emissions seemed elusive. But a graduate discovered that by applying ‘clever maths’ a solution could be found.

A desire to overcome the challenge of finding accurate fuel consumption figures has delivered real-world data for more than 60,000 cars and air quality ratings for hundreds more.

Six years ago, Nick Molden, founder and CEO of Emissions Analytics, simply wanted to know why drivers were struggling to match official fuel economy figures. He started digging and soon discovered that the official testing regime – the New European Driving Cycle (NEDC) – was to blame.

“Manufacturers were legally exploiting the test to get the most flattering figures,” says Molden. “We now had to find out whether it was possible to come up with an alternative system which could provide a better number.”

It would need to be able to test lots of cars in the same way and, importantly, provide data which could be interpreted as near as possible to the real world.

“It looked too difficult for a long time,” he says. “We looked at building our own laboratories, but that meant having a massive physical infrastructure which would have cost millions of pounds.”

It would not have provided the on-the-road data the Oxford University graduate craved either. “Unless we were taking a real car, a real driver and putting it on a real road, it wasn’t going to deliver what we really wanted,” he says.

Luckily for Molden, a possible solution was being used in the US. Several truck manufacturers had been caught using a crude defeat device to beat the emissions testing regime in the 1990s. After having to pay a fine of $1bn, some of the cash was used to develop a monitoring system which could be used to keep tabs on them in the future.

The result was the Portable Emissions Measurement System (PEMS) – the same technology found in a traditional testing laboratory, but packaged for on-board installation.

It was able to measure the gases coming out of the tailpipe as well as recording how and where the vehicle was being driven.

PEMS uses a process called the carbon balance method. “As long as you know the chemical make-up of the fuel in the tank, you can measure the amount of carbon monoxide and dioxide coming out of the exhaust, and calculate mpg very accurately,” says Molden.

“It’s about the number of molecules. If that amount of gas has been created, this amount of fuel must have combusted.”

However, once the system had been adapted for use on a car, one more problem remained. “When you’re testing on the road the thing you can’t control is traffic flow,” explains Molden. “You can keep the driver the same and the route the same. You can do it within certain ambient conditions and you can make sure the tyres are inflated to the right pressures. You can do a lot to standardise , but, ultimately, you can’t control the traffic flow.”

Molden’s solution was to combine PEMS with some “clever maths”. The portable unit was able to measure exactly what came out of the exhaust pipe, and how the car was being driven second-by-second. “That’s crucial, because you can then relate how the car is being driven to how much it emits and, where speed and acceleration has differed from the target cycle, you can make small mathematical corrections.

“It was the Eureka moment. We could have the authenticity of the road and, with some clever maths, the accuracy of the laboratory.”

Emissions Analytics was launched in 2011 and began testing cars sourced through dealerships, rather than direct from the manufacturer. “We didn’t want to be fed one of their ‘golden’ cars or pre-production models,” explains Molden.

The data began to roll in and, after around 18 months of testing, they started to notice a problem with data relating to nitrogen oxides (NOx).

He says: “We always believed there was a fuel economy gap, but we hadn’t really thought about NOx.”

The International Council on Clean Transportation (ICCT) published research in 2014 on early Euro 6 diesels which showed they were 7.1 times over the legal limit for NOx.

“Half of the data came from us,” says Molden. “That was the first time a serious piece of work had been put into the public domain.”

The findings were to prove crucial. A year later, Volkswagen admitted using a defeat device to beat strict emissions tests in the US.

Its bespoke services include benchmark tests, product evaluation and real-world running costs, and it offers subscription access to its database of test results, as well as confidential testing services for product development and evaluation.

It is also currently in partnership with Imperial College, London, studying urban emissions for transport planning and policy.

Fleets will be particularly interested in its recently launched, free-to-use Equa Index, which contains air quality ratings for more than 400 vehicles and real-world fuel economy data for more than 60,000 cars – almost every car on sale in the UK in the past five years.

Real-world fuel economy is based on more than 800 vehicles, covering a wide range of makes, models and engine types. This enables Emissions Analytics to accurately forecast fuel economy for cars it has not yet tested.

Molden says: “We are not in the business of just pointing fingers at bad performers, it’s a way of being able to sift the good from the bad.”

Manufacturers have welcomed the Equa Index, but Molden admits they were wary in the beginning.

He explains: “When we started publishing data we had a lot of manufacturers wanting to know how we were testing the vehicles.

“It was generally the ones which we were publishing unflattering data for, but we were happy to expose our methods to scrutiny and we now have more than half the manufacturers by sales volume subscribing to our database.”

Molden isn’t about to rest on his laurels, however. He wants the Equa Index to be the go to a real-world emissions rating system, just like the European New Car Assessment Programme (Euro NCAP) has become the must have measure for vehicle safety.

“We hope that eventually people won’t consider a car with a low rating in the same way they wouldn’t touch a two-star car,” he says.

“Euro NCAP is an entirely voluntary, non-statutory system. It’s just done well and accepted as currency. We want to do the same.”

The best and worst performers

Nearly all new cars (98%) fail to achieve their official fuel economy figures, according to the Equa Mpg Index.

Emissions Analytics’ research has found that in 2016 the average shortfall between official and real-world fuel economy has reached 29%, with some vehicles more than 40% adrift.

Only Aston Martin’s 4.7-litre Vantage Coupe has achieved official consumption figures in the past two years in the Emissions Analytics’ database.

The 1.6-litre diesel Honda Civic was the best-performing car, achieving 61.8mpg against a claimed combined of 78.5mpg – a shortfall of 21%.

Britain’s best-selling car, the Ford Fiesta, managed 37.8mpg, against the official figure of 62.8mpg for the petrol version.

Worst-performing was BMW’s X5, at 16.2mpg under Emissions Analytics’ tests, versus official figures of 25.4mpg.

Ironically, Volswagen, which last year admitted using software to cheat lab tests, is the only manufacturer to achieve an air quality ‘A’ rating for a diesel vehicle, with its new Tiguan 2.0 diesel. This means that its real-world NOx emissions are less than or equal to the Euro 6 limit recorded in the laboratory.

The Tiguan was the fifth Volkswagen model and eighth Volkswagen Group vehicle to be given an A rating since the EQUA Index was launched this year.