More than 110,000 vehicles were stolen last year, according to Home Office figures, a rise of almost 50% compared with five years earlier. That’s equivalent to 300 thefts a day. And, starkly, more than half of them will never be recovered.

Far from making it harder to break into vehicles, modern technology is creating new ways for resourceful thieves to gain access to cars and vans, with a rapid rise in keyless relay attacks which defeat the latest anti-theft systems.

Resolving this issue has been given new urgency after the recent spate of vehicles used in terrorism attacks.

Tracker, which celebrates its quarter century anniversary this year, is leading the charge against vehicle theft. It has an impressive record, claiming a 95% recovery rate on stolen vehicles that are fitted with its Thatcham-approved technology.

Key to its success is the deep relationships it has with police forces nationwide and the fact it operates its own ‘low-powered wide area network’ (LPWAN), which provides 99% coverage across the UK. However, a profusion of competitors have entered this space in recent years, offering myriad solutions, which has prompted a business rethink.

Greig Hilton, Tracker UK managing director, joined in November 2017 to, as he puts it, “tidy it up a bit and reposition it for the future”.

He explains: “Lots of competition has come in, but Tracker has a lot of know-how with communications and tracking assets. It needed someone to come in and realign the business.”

One of the biggest opportunities centres on the LPWAN, a wireless telecommunications network upon which Tracker relies for the recovery of stolen vehicles. Part of the internet of things, it enables small data reporting from across the country.

It also opens wider opportunities which Tracker started to investigate following its acquisition in February by CalAmp, a Californian tech company.

“CalAmp bring new developments on connectivity, real-time analysis and data,” says Hilton. “They will give us a shot in the arm with their software platforms and services that lay over the top (of ours).”

One service, already in use in the US which is being remodelled for the UK, reconstructs the events leading up to a crash for the police and insurance companies, as well as alerting them when a crash has occurred.

However, Hilton is mindful that stolen vehicle recovery will remain “our bread and butter”. Each vehicle is given a unique IP address enabling it to be tracked via GPS and VHF to an accuracy of one metre, even when hidden in containers or underground – or across Europe.

If a car containing a Tracker unit is stolen and passes another car with a Tracker unit in, it alerts the car through ‘mesh network’ technology, which helps the police to identify its location.

“We get several hundred mesh hits (on a stolen vehicle) that help the police to home in on the car and also gives a snail trail of where it’s been and the speed it’s travelling at,” says Hilton. “It adds to the security blanket.” 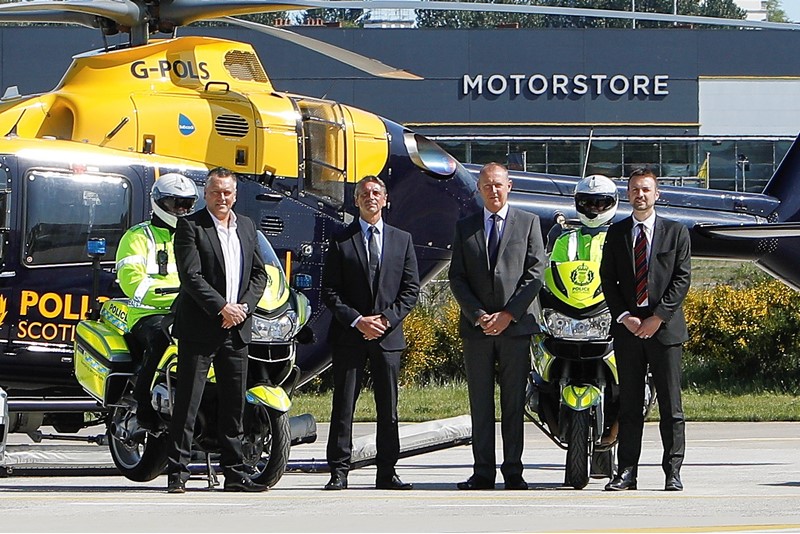 Tracker also has products designed for plant and systems compatible for hybrid and electric vehicles. Its enhanced stolen vehicle service tackles the issue of relay attacks by using Bluetooth tags to alert the driver if the vehicle moves without use of the keys.

The relationship with the police is a vital component about which Hilton is justifiable proud.

“We have really strong ties with the police and we are the only service where the police will actually intervene on our behalf to recover vehicles,” Hilton says. “We have 1,700 police vehicles and 20 police helicopters equipped to track our products.”

Tracking might not be restricted to vehicles in the coming years, either. “The police are under pressure with resource so we could enhance our solution to help them; for example, tracking elderly people or vulnerable people – it’s the same technology,” Hilton explains.

The fleet telematics solution was rebuilt after former parent Tantalum divested three years ago. Its target market is SME fleets of 20 vehicles-plus, rather than large corporates which tend to be tied into lengthy contracts.

“It’s a simple solution that a PA can manage as well as a fleet manager,” Hilton says. “We also have technology where we collect data from the vehicle and provide a solution.”

Over 25 years, Tracker has installed more than one million tracking units, and currently has around 100,000 active subscribers who are traced 24/7. They consist of a mix of business and private and include cars, vans, motorcycles and leisure vehicles such as motorhomes and caravans.

While some vehicles have trackers fitted but are no longer subscribers, all is not lost if their vehicle is stolen.

“We work with police and insurance companies on a no win, no fee,” explains Hilton. “We can reactivate for a one-off fee to find the car. We have a lot of insurers signing up for this service.”

Tracker’s priority now is to identify new solutions for its technology, including areas where its data collection can bring insight and add value for the customer in the age of the connected vehicle.

One example is real-time parking data, which reduces urban congestion and emissions because cars do not have to drive around looking for a space. Another is an extension of the Bluetooth tags to measure humidity, temperature and light, which could be used to monitor the temperature of refrigerated units. Expect to see these, and more, come to market over the next 12-18 months.

“If we don’t have the skills sets to manage connectivity and real-time data, we won’t have a long shelf life as a business,” Hilton says.

“You can’t have enough data; you just have to understand the problems you are solving. And our service is sold on problem-solving.”

Greater Manchester has moved up the league table from seventh place in 2016, to third place in 2017 according to Tracker’s Top Ten Most Stolen and Recovered Vehicles.

The new owners say the tracking and telematics business will be aligned with its Italian operation, LoJack Italia.