More drivers are buying into telematics 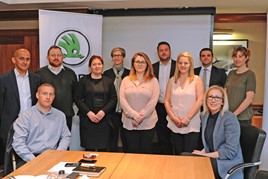 Telematics continues to be one of the major tools used by fleet decision-makers to improve operational efficiencies. The data generated by the technology can cut fuel use, incident rates and improve driver behaviour, but fleets can face difficulties winning buy-in from drivers.

These were among the topics debated at a recent Fleet News Awards roundtable, sponsored by Škoda UK, which took place at the Amba Hotel Marble Arch, London.

Fleet News: How are you using telematics technology to improve your fleet operation?

Matthew Hammond, UK fleet manager and transport manager, Altrad services: When I joined the business about five years ago our incident rate was running at around 30%, which was unsustainable. We looked at various incentives to try to stop the guys damaging the vehicles, but they didn’t work, so we introduced telematics. We do a lot of work in-house analysing the data and how we can use it to prevent incidents. In the three or four years since we installed telematics, our incident rate has fallen to 11%.

One of the reasons it’s been so successful is that everybody who is in the business has bought into what it’s about. Two years ago when we changed our 300 vans, nearly every driver who spoke to us said “don’t forget to change our device over”, because they realise that if a member of the public complains about their driving, they’ve got a device which shows they weren’t doing what they were being accused of, which works to our advantage.

FN: What data do you analyse?

The likelihood that they are going to go into the back of somebody is higher than for a guy who is a smooth driver. We will use that data and look at their figures for the previous three months to see if there is a pattern or if it is just a one-off.

If there is a pattern we look at if there is a certain road or time when it happens, and will then go through that data with the driver. We also put them on an e-learning course which is specific to driver awareness and then we will monitor the progress of that driver to see if there is an improvement.

Sam McIndoe, fleet manager, Radian: We’ve done the same. We switched telematics platforms in 2016-ish and had a huge accident reduction just through better driving. We had about a 37% reduction in collisions in the first year.

MH: We’ve looked at driver league tables and are now moving to the driver getting their own score data on their phone. At the end of the day they can sit and go ‘ok, has it been a good or a bad day? What’s my score? Where am I in the league?’ It’s instant information for them.

Gary Bertie, hires and lease services leader, Scottish Water: We introduced lightbars for the cabs and that was an interesting dynamic. Some drivers were completely against having these, but they now accept it as it helps us and them. We try to incentivise them to be better drivers, although there are penalties if they consistently perform poorly. We have driver training and additional support measures in place, and these have brought the driver behaviour up.

FN: Do you consider safety technology when ordering vehicles?

GB: A lot of the safety technology in cars just isn’t transferred into the LCV fleet. We want to spec driver comfort features such as 16-point adjustment of the seats because of the type of journeys our drivers are doing, but a lot of the manufacturers just aren’t interested.

SMcI: You get cars with all this fantastic technology, HGVs also have it for compliance reasons, but then LCVs are kind of left in the middle.

I tell our drivers that yes, they may be a plumber or a carpenter by trade, but firstly they are drivers. They have got our names plastered on the side of their vans and so they need to be trained to drive properly.

With HGV drivers you get that straight away and they also take much more pride in looking after their vehicles. We have two LCV drivers who used to drive HGVs and their vans are immaculate: they are like my champions.

MH: There is a big gulf at the moment between van and truck drivers. We have a couple of truck drivers who won’t get in their cabs without taking their shoes off and putting slippers on. Their cabins are immaculate. Also, when we changed our vans two years ago we specced up a batch of them and the difference in the way they are treated is unbelievable. It’s the pride thing. You give drivers a nice van with Bluetooth and air-conditioning and fitted seat covers and they are spotless, but the bog-standard, run-of-the-mill van the other guys get is just a tool, isn’t it?

FN: Have you seen a shift in the number of perk drivers taking cash allowances?

MH: Over the past four or five months we’ve seen about 70% of people migrate from car to cash because of the tax implications, but we treat grey fleet drivers the same as those in company cars. We have a portal set up to capture insurance data, MOTs etc., and offer them the same benefits through our tyre and windscreen policies. We used to say there’s your cash, away you go, but that isn’t right. If a company car driver phones up and says his car won’t start, we move heaven and earth to get them to a job, but if it was a cash car we’d just say ‘sorry mate’. It was wrong.

David Fisher, fleet manager, Rexel: You have to be slightly careful with that though because they are obviously paid to travel for work, so you can’t really provide them with another benefit on top.

MH: Absolutely, but the theory is that if their car has broken down and they need transport to get to work, we’ll get a hire vehicle or a pool vehicle to get them moving. We won’t leave it with them for six weeks, it’s a two-to-three day thing.

DF: If our grey fleet drivers don’t submit all the information required of them, tyre checks and insurance we stop their cash.