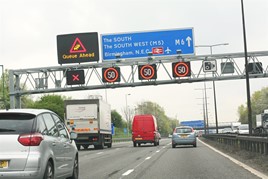 One-third of all road traffic collisions are caused by poor lane discipline, according to research by telematics and smart camera provider Crystal Ball.

Its analysis of several hundred incidents recorded on dashcams found many drivers wandering across lanes without indicating, failing to check blind spots and cutting up others at roundabouts - accounting for 37% of all crashes captured.

Raj Singh, managing director at Crystal Ball, said: “The scale of lane indiscipline on our roads is at epidemic levels, and the results of this behaviour, is appalling.

“We undertook this analysis because our system records every incident, linking them to speed, time, location and the forces involved, so we have a very good understanding of what actually goes on Britain’s roads.

“Most of the analysis we undertook showed that these accidents were not accidental at all: in fact they were almost all entirely avoidable if drivers had kept within their lanes, and only moved when they had looked and then signalled.”

Drivers were found to regularly ‘drift’ across lanes without checking their mirrors, violently cut across other to reach exit slip roads and weave through heavy traffic to try and make up time.

Speed not a factor

According to the research, very rarely is speed a contributing factor. In 95% of incidents involving lane indiscipline, both drivers were under the speed limit, with many of the crashes taking place in urban centres. But Crystal Ball’s footage shows that fault is down to one careless driver almost every case.

“Often the issue with incidents such as these, with two vehicles coming together side-by-side, is that blame can be hard to apportion in the aftermath, with both parties claiming the other was at fault,” added Singh.

A new campaign has been launched in Cheshire warning middle-lane hoggers that they are putting their lives in danger, as well as risking an on-the-spot fine.

One third of drivers admit to lane hogging

Four in five drivers (82%) say they have been tailgated while a third (32%) admit to hogging the middle lane, research from Confused.com shows.

What is the true cost of a collision? Experts explain

Paying the cost of vehicle repair or insurance excess is just the tip of the iceberg, with the true cost of a collision being much greater. Andrew Ryan reports